A connection to the past

It’s often said that journalists write the “first draft of history.” In the case of North Idaho native and former journalist Gary Pietsch, he has a chance to add to that “first draft” and pen a definitive work covering the early days of Sandpoint. 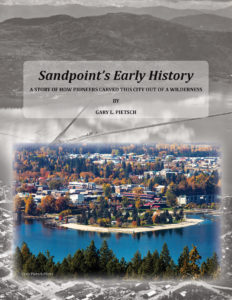 Sandpoint’s Early History is the result of a lifetime of learning and writing for Pietsch, who has called North Idaho home for all of his 84 years. The book, covering the entire history of Sandpoint from the Glacial Lake Missoula floods to present day, is published by the Bonner County History Museum and Keokee. Pietsch will launch the book Saturday, Dec. 7 from noon to 2 p.m. at the museum. He’ll also be signing copies of his book from 1-3 p.m. on Saturday, Dec. 14 at Vanderford’s Books and Office Products.

Pietsch was born in Bonners Ferry and has lived in Sandpoint all of his life. After graduating from the University of Idaho with a bachelor’s degree in journalism and a stint in the U.S. Army, Pietsch returned to his home in Sandpoint to work for his father Laurin Pietsch, who started the Sandpoint News-Bulletin in 1924.

“In 1924, with $500 worth of borrowed money, he started a one-page mimeographed daily called the Daily Bulletin,” Pietsch said. “At one time Sandpoint had three weeklies and two dailies until he bought out all the competition, including the Northern Idaho News. That’s how it ended up as the Sandpoint News-Bulletin.”

Pietsch began working for the News-Bulletin in 1958, rising through the ranks as a reporter, and eventually as editor and co-publisher with his father until he sold the paper to Pete Thompson in 1975.

“We had the largest circulation of any weekly in the state of Idaho,” Pietsch said.

Thompson eventually morphed the Sandpoint News-Bulletin into the Bonner County Daily Bee, which is the paper of record today in Bonner County.

After his father retired, Pietsch bought the printing equipment and began the Selkirk Press, which he ran until 2000 when he retired and turned the business over to his daughter, Wesley Dustman. Pietsch’s son, Chris, also works in journalism as the photo editor for the Eugene Register-Guard in Eugene, Ore.

“He’s a third-generation Pietsch still in the newspaper business,” he said. “I’m very proud of that.”

Pietsch said he has always enjoyed history, even at a young age.

“For my senior thesis at the University of Idaho, I did the history of newspapers in Sandpoint,” he said. “I’ve always been interested in history.”

A member of the Bonner County History Museum and Historical Society, including a stint as president, Pietsch said Museum Director Olivia Luther asked him if he was interested in writing about Sandpoint’s early history.

Aptly-titled, Sandpoint’s Early History begins with the ice age floods of Glacial Lake Missoula, which formed the landscape of North Idaho, then covers explorer David Thompson’s time in the region.

“Then I followed the activity of the local natives, the Pend Oreille and Kalispel tribes,” Pietsch said. “Then I chronicled the coming of the railroad and how that all came to pass, because that really set the tone on the development of Sandpoint.”

The book also includes history about early residents who emigrated to Sandpoint before the railroads, as well as the development of the town, how the streets were named, the shift of the town center from the east side of Sand Creek to its present location, and a detailed analysis of some of the men and women who shaped Sandpoint’s history.

Pietsch ended up covering all the costs of the book’s production and gifted the first printing to the museum to sell as a fundraiser.

“Gary has been a longtime supporter, volunteer and advocate for the museum,” museum director Olivia Luther said. “The board and staff at the museum are overwhelmed by his recent gift of Sandpoint’s Early History, and all of the research, writing, care and detail he put into creating such a wonderful book.”

Pietsch said it’s important to record these events because future generations won’t be able to access the information without a reliable account.

“I thought it was a good idea to nail down how things used to be and how they came to pass,” Pietsch said. “The history that sprung from the early pioneers is pretty fascinating.”

Books will be for sale at both at the Museum on Dec. 7 and Dec. 14 at Vanderford’s. Order online at keokeebooks.com.