Confessions of an amateur seamstress

There is comfort in collecting skills from days of yore. In a world that’s constantly hurtling toward the next advancement, knowing how to make things and fix them when they’re damaged is becoming increasingly rare. So when a neighbor offered to give me a sewing machine she no longer used, I didn’t hesitate to accept.

Before someone gets their homemade panties in a bunch about me categorizing mechanical sewing as an old-timey skill, it must be understood that while sewing used to be a necessary art in most households — even taught in home economics at school — that isn’t the case anymore, and certainly not during my lifetime. In my experience, people in their 20s who know how to sew were either lucky enough to catch the tail-end of fully funded home ec classes, or independently sought out sewing lessons from a family member or friend. 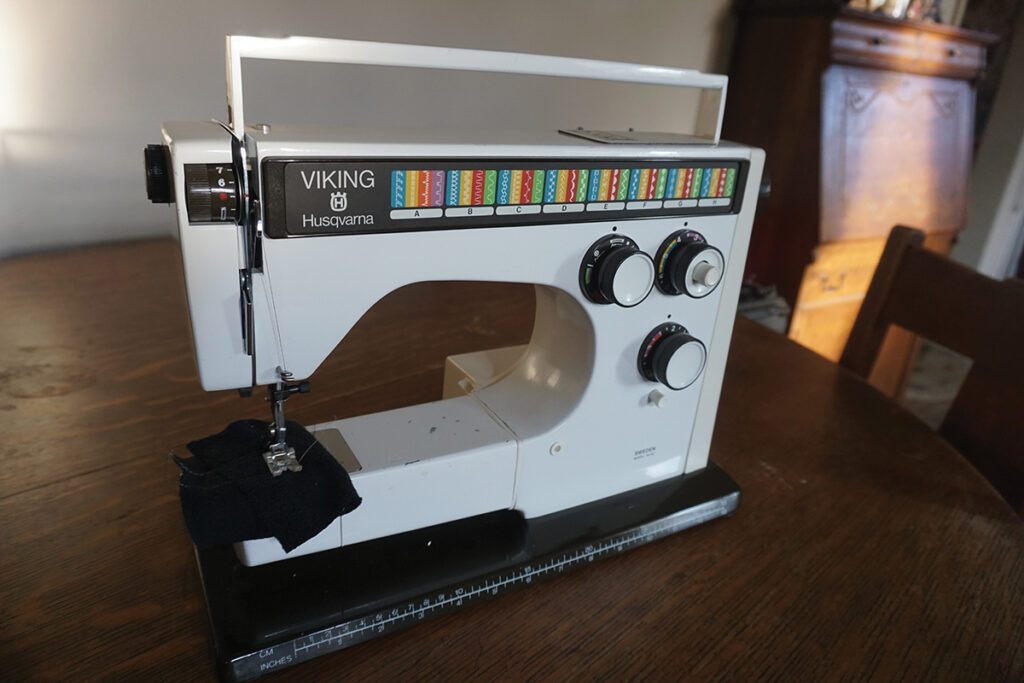 The 1980s Viking sewing machine made by Husqvarna. Photo by Lyndsie Kiebert.

Me? I can count on one hand how many times I’ve used a sewing machine. I envy people who are capable of making beautiful quilts, designing their own clothing or whipping up a random curtain on a Sunday afternoon. When the pandemic started, the matriarchs who surround me started churning out adorable cloth masks in varying styles and patterns, doing their part to combat the virus.

One of these matriarchs is Karen, my neighbor and lifelong friend. Along with the sewing machine, I accepted the customary lesson on how to use it, seated at her kitchen table surrounded by scraps of practice fabric.

I had never been so intimidated by such an unassuming machine before; the 1980s Viking presented an array of knobs and levers that I had yet to master. I recognized one thing, though: the Husqvarna logo, bringing to mind a machine with which I am only mildly more proficient — a chainsaw.

Karen helped me navigate through a few basic sewing techniques, showing me how to thread the needle and select different stitch lengths. I headed home with my shockingly heavy Husqvarna Viking sewing machine in hand, along with a box of thread and a small notebook for jotting down all my troubleshooting. I had no doubt there would be plenty to write about.

I brought the machine home just before Christmas, and decided this week it was time to tackle some mending. This was my main motivation for accepting Karen’s offer — my fiancé, Alex, will find a way to tear holes through every piece of clothing he owns, particularly thick Carhartt work pants. I set the machine up at my dining room table and resolved to tackle something a little less high-stakes: long johns with a torn waistband and a sizable hole in the crotch.

I stitched a single, jagged run along the waistband, and wanted to put the machine in reverse to go back over it. After searching the machine for 10 minutes for a reverse knob or lever, I called Karen.

Within minutes, she came to my rescue. She made an entry in the troubleshooting notebook in her beautiful script handwriting to remind me where to find the reverse button next time.

I finished up the long johns after her short visit, and took in my handy work. I used light blue thread on black fabric, and decided that was to keep me honest. (It was really because I was afraid to change the thread out and not know how to set up a new spool.) There were various stitch lengths from pulling the fabric through the machine too quickly, and swerving lines from my unsteady hands.

Still, the holes were gone. These long johns were, for all intents and purposes, in operating order again. Alex’s profuse thanks confirmed that my makeshift attempt at sewing was worthwhile.

“I know it doesn’t look great,” I said, gesturing toward the Frankenstein long johns in his hands.

I returned to my work station and started packing it away, first taking a moment to add my own note beneath Karen’s in the troubleshooting notebook: “Repaired some of Alex’s long johns. Karen came over to help me find the reverse button.”

I dated the page and tucked it away, slightly less discouraged and determined to sew another day.