Members of the San Francisco-based band Afrolicious were looking for something to eat before their Aug. 3 show at The Hive. After setting up at the venue, they decided to take a walk around downtown Sandpoint and find a good spot for dinner. They didn’t make it far before experiencing an ugly incident.

According to frontman Joe McGuire, as he and a few of his bandmates walked through downtown, a 20-something white man with long brown hair sped up to the group in a car, locked eyes on trumpeter Oliver Taylor, made a gun shape with his hand and pulled an imaginary trigger. 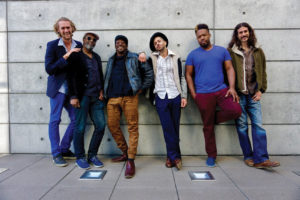 “He saw three of us [two of whom were white] and he looked right at the black man. He was looking at the tall, young, good-looking black guy, like, ‘You’re my enemy,’” McGuire told the Reader in a phone interview. “It was like, wow, we just got to town and this happens.”

It got worse from there.

“I looked back to see if it was what I really thought it was, and [the driver] pulled a large pistol out and showed it to me, smiled and just drove away,” said Taylor, adding that the man didn’t directly point the gun at him, but his intentions were clear.

“He didn’t threaten me that directly, it was more of a show of force, and sort of sadistic, like he was really enjoying it,” he added. “I’ve never experienced anything like that in my life.”

McGuire said Afrolicious, which plays a style of Afrobeat, Latin, disco-funk, has toured small towns throughout the country and encountered racism in more casual forms, but what happened in Sandpoint was “downright frightening. It was like, damn, somebody didn’t want to make us feel welcome.”

Incidents like that are part of why Sandpoint Mayor Shelby Rognstad has asked for $8,000 in the 2020 proposed budget to support the so-called “Inclusion Initiative.”

According to the budget narrative, the initiative is intended to help “eliminate hate and discrimination and strengthen social equity in our community” by supporting “training, education and other programs” at the city and in partnership with nonprofits and businesses to “promote understanding, acceptance and value differences between people of different races, ethnicities, genders, ages, religions, disabilities and sexual orientations.”

The proposal came up as part of a larger budget conversation at the regular Aug. 7 meeting of the Sandpoint City Council, prompting some pushback of its own.

“I have to ask, how does this inclusion initiative increase understanding and respect for one another?” asked Sandpoint business owner Todd Prather, who added that the “hollow initiative” presumes that “the entire community is guilty of hate and discrimination. … It causes the very division that it’s supposed to get in front of.”

Prather continued by questioning whether an effort to “legislate kindness” might not “kill creativity in Sandpoint.” He doubted that such policies are even necessary.

“I am unaware of problems with either hate or discrimination in Sandpoint; I’m sure it exists in a here-and-there sort of way,” he said. “It’s just a very slippery slope when you get into legislating political correctness.”

Hive General Manager Rob Smith, who was born and raised in North Idaho in the 1980s and ’90s remembers the bad old days of the Aryan Nations. He said racist attitudes persist in the region but, “as a venue owner, all I can do is promote love and music. … Unfortunately the stigma [of racism] is still around us. … [But] the love that this community has, the conscience that this community has, overpowers all of that.”

Taylor, a 22-year-old graduate of UCLA, where he studied classical trumpet performance, said the incident in Sandpoint gave the band pause. While band members agreed that Sandpoint as a whole showed them nothing but respect and appreciation, “I didn’t really feel entirely safe in town,” said bassist Eric Noble, who added that it isn’t lost on him that two mass shootings occurred elsewhere in the country within 48 hours of their experience in Sandpoint.

“In the context of those shootings it’s like, wow, everything becomes real,” he said.

For Taylor, it was also a reality check.

“I feel like I understand that that type of behavior doesn’t come from places of real power, it comes from places of insecurity and fear,” he said. “Afterwards we were just kind of talking about it. I was basically saying this was a wake-up call for me; I can’t really take my safety for granted when I travel.”

The band declined to report the incident to police because the man didn’t point his weapon directly at Taylor. Rather, Afrolicious went on to play a high-energy show at The Hive and took the opportunity to tell the crowd what had happened earlier in the evening.

“We’re always trying to address social issues and issues of the day,” said drummer Vincent Fossett. “We’re always just trying to bring a positive vibe everywhere we go. We’re not tripping on this … we’re more interested in how do we raise the frequency of this country so we can move past this bullshit.”