Wisdom in the Wild:

Looking through photographer Paul Bannick’s intimate portraits of owls, it’s easy to see why these mysterious birds have captured his attention for more than a decade. Their silent grace is matched only by haunting, beautiful eyes that speak of wisdom in the wild. 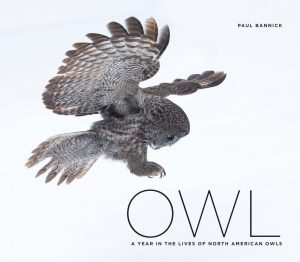 “Owl: A Year in the Lives of North American Owls,” by Paul Bannick.

Bannick will share the fruits of his research and field work that it took to create his book, “Owl: A Year in the Lives of North American Owls,” at the Little Panida Theater on Friday, Feb. 10. He will host presentations at 3 p.m. and again at 6 p.m., utilizing video, sound and stories of how he obtains those dramatic images while following 19 species of owls through the various stages of their lives .

When asked why owls appeal to him so much, Bannick said, “I love every owl. Oftentimes the last owl I spent time with is my favorite. I have spent tens of thousands of hours with research and field time.”

Bannick said he painstakingly learned about each of the 19 species he photographed in the book and “tried to spend time with each at the four critical seasons of their lives; courtship and nest selection, the raising of the young, helping the young gain independence and finally migration and survival in the winter.” 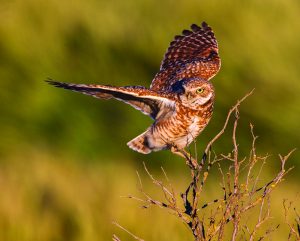 The critical response to the book has been overwhelmingly positive, which is not hard to believe when gazing into these arresting photographs of owls alighting on branches, or peering from nests with their all-knowing eyes.

The book is a magical combination of fine art photography and intriguing study of the relationships owls have with their habitat. It’s clear that Bannick has done his homework.

In Bannick’s first book, “The Owl and the Woodpecker,” which is still one of the best selling bird books in North America, he looked into the relationships owls had with woodpeckers. In “Owl,” Bannick helped people compare their own habitats with that of the owl. 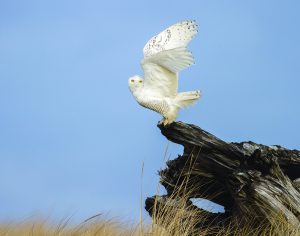 A Snowy Owl prepares to launch into flight from a piece of driftwood just after sunrise. Photo by Paul Bannick.

“In this book, people can relate to the lives of owls,” he said. “Through their struggles, people get a better sense of why these elements of habitats are important for all of us.”

While Bannick photographs owls all over North America, he found an abundance of them in our neck of the woods.

“A lot of my photos were taken in Idaho,” he said.

Of particular interest to Bannick was exploring the owls of the agricultural landscapes, how a variety of owl species can survive by using the exact same farmer’s fields and public lands, but each retreats to a different habitat to nest.

“Owls are critical,” said Bannick. “They help control the farmer’s pests. They have an irreplaceable aspect with people. That type of story is repeated on every landscape in America.”

To obtain such intimate portraits of these creatures, Bannick spends a lot of time in the field, trying to stay warm. While researching courtship for the Snowy Owl, Bannick discovered a lack of photographs capturing the ritual.

Tags: owl: a year in the lives of north american owlsowlsPaul Bannickphotographywildlifewildlife photography