The Bonner County Commissioners hosted a public meeting Friday to hear questions and concerns over the possible shift of the county’s Emergency Management Services from government operated to a private, nonprofit model. 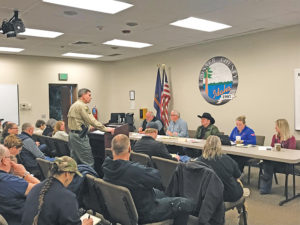 The meeting was prompted by news that the county is considering North Valley EMS, which Commissioner Dan McDonald said “was created to potentially do business with Bonner County” by interim EMS director Jeff Lindsey.

Friday’s meeting saw several proposals for what local EMS and fire officials saw as viable options for improving Bonner County EMS, as well as requests that forthcoming decisions be made more transparent.

“What I don’t understand is all the meetings behind closed doors where none of us were invited, and my first clue about this was from what I read in the paper,” said County Treasurer Cheryl Piehl. “I am truly disappointed in that process. I think we should move forward and we need to include all the players.”

Many argued a major way to improve transparency would be to re-establish the EMS advisory committee, which is mandated under county code. The board went ad-hoc in 2016 when members stopped going to meetings, said McDonald.

“‘Ad-hoc’ means ‘as needed,’ so it seems like with this kind of response there must be something needed,” said Dave VanNatter with the West Pend Oreille Fire District, gesturing toward the room full of people.

Mark Sauter, president of the Bonner County Fire Chiefs’ Association, read from a letter submitted by his organization. He said that because they have little information directly from the BOCC regarding the possible future of EMS, it was hard to provide input. Sauter said members of the association do believe the EMS system can be improved, and they “applaud the board” for looking into solutions.

“However, with the information we have now, we don’t have confidence that the current process will address our concerns,” Sauter said. “We insist that the EMS system planning process be restarted so that our fire districts are involved and provide their insight. We believe our combined efforts will be worth the time spent.”

Several attendees advocated for a fire-based EMS system, including Bonner County Commissioner Steven Bradshaw, who joined the BOCC after initial talks about an EMS shift to a nonprofit model took place. Bradshaw characterized the nonprofit model as “a map to 100 percent failure.”

“Fire-based EMS is probably the most successful nationwide, (but) there’s a 100 options out there,” he said.

Sheriff Daryl Wheeler emphasized the need to keep EMS within county government, and proposed the system be moved under the umbrella of the Bonner County Sheriff’s Office. He said one successful model is Alger County, Michigan. Wheeler said he spoke with the Alger County sheriff, who said the sheriff office-based EMS model has been better than any other model they’ve tried. He urged the BOCC to make a “faster-than-normal” decision.

McDonald said the county is anywhere from six months to a year away from making any changes.

“We don’t walk into this lightly,” McDonald said. “It seems to be the attitude (of the public) that somehow we willy-nilly woke up one day and said, ‘Hey, I know what we can do today — let’s screw with EMS.’ We’ve been looking at this for quite some time.”

Commissioner Jeff Connolly emphasized that no decisions have been made regarding the future of county EMS.

“This isn’t about saving money,” Connolly said. “Nobody here wants to risk life to save money. This is about trying to offer the absolute best response and service to the people of Bonner County for the money that you are already paying.”