I’ll be frank, it’s been a rough week and we could all use a good laugh right about now. While the world is panicking about the coronavirus outbreak, stop for a moment and chuckle at the absurdity of… the catfish.

“Catfish” is a broad term for a group of scaleless fish toting what appear to be mustaches or cat whiskers. These are called barbels, and are a fairly common feature among fish. Most barbels are located somewhere near the mouth of a fish, which makes sense, as it’s a sensory organ loaded with sensors for taste. The barbels are used by catfish to taste their surroundings in murky water and better locate food. 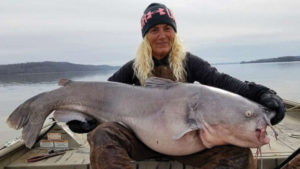 A woman holds an enormous catfish she pulled out of the river. Yeehaw. Courtesy photo.

Some catfish are considered detritivores, which is a fancy way of saying “bottom feeders.” These catfish trawl along muddy river bottoms searching for all manner of scraps from decaying meat, plants and even feces. These catfish are the underwater world’s garbage collectors and help maintain a balanced ecosystem so that disease doesn’t run rampant in what can sometimes be a very isolated body of water.

Not all catfish are bottom feeders, however. Consider the dreaded candiru, or “vampire fish,” of the Amazon Basin in South America. Candirus have a bad reputation for swimming up the urethra of unsuspecting men relieving themselves in the river. Despite being famous for this, there has only ever been one modern case of such an instance, and the accuracy of the patient’s claims has been highly suspect and contradictory since the incident. The primary food source for the fish is blood taken from the gills of larger Amazon River fishes.

Ranging from seven to 16 inches long, they don’t look like your typical catfish, appearing translucent with distended midsections that inflate like the abdomen of a tick while siphoning blood from a host.

Some catfish can reach monstrous proportions. The Mekong giant catfish lives up to its name, capable of growing to a weight of more than 400 pounds in six years. Native to the Mekong River in Southeast Asia, the Mekong giant catfish is critically endangered as dams popping up throughout the region begin to isolate populations of this freshwater titan. Most attempts at breeding the species in captivity have met with critical failure, leading to many carcasses being harvested to feed local villages. As a North Idaho point of reference: A fish that large is capable of providing a similar amount of meat as a small elk.

Another type of catfish has a very unique trait among fish. The walking catfish is capable of surfacing from water and “walking” across the land with its pectoral fins, providing a bizarre and comical sight to anyone lucky enough to witness it. Unfortunately, this trait has also helped it become an invasive species that is extremely challenging to remove. Initially imported from Thailand to be used as a food source in the United States as far back as the 1960s, the walking catfish has made its home in waters from Florida to California and even Connecticut. If you’re fortunate enough to cross paths, you don’t even need a rod and tackle to catch one of these bad boys — just some good ol’ fashioned elbow grease.

Interested in owning your very own catfish? The plecostomus is a breed of catfish commonly sold to aquarium hobbyists as a cure-all for troublesome algae clouding up your aquarium. This is not correct. While some plecostomus, often referred to as “plecos,” do feed on algae, they can’t clean out a tank on their own. The widespread presence of algae in your aquarium is usually indicative of a greater imbalance of nutrients or lack of cleaning that won’t be solved simply by adding another fish.

In addition, despite having a unique sucker mouth that allows the pleco to adhere to surfaces (and seemingly suck-up algae from the walls of aquariums), not all plecos are algae eaters. Some exclusively consume wood while others are carnivorous. There are many hundred different breeds of plecostomus, many of which look very similar to one another but harbor very different needs — because of this, it’s always good to consult a professional. The library has a number of great books for the hobby aquarist, but if you have no idea where to start, ask a librarian (but you may have to wait until after the coronavirus pandemic, as the Library announced it would be closed starting March 17).

Before I go, I thought I’d go over one last type of catfish: the social media kind.

Popularized by the 2010 documentary (and later TV show), Catfish, the term refers to someone who is pretending to be someone entirely different on social media, generally engaging in a long-term relationship with someone representing their real self online.

Supposedly the term came from when commercial cod from Asia would be shipped to America, the flesh would be mushy and tasteless. Once people started introducing catfish into the vats, the cod would stay agile and alert, improving the taste of the meat.

I can’t tell you with absolute certainty that there is any truth to that statement, so you’d better call a librarian.

Stay curious (and healthy), 7B.