U.S. Sen. Mike Crapo (R-Idaho) kicked off a full day in Bonner County with a gathering Aug. 7 at the Cocolalla Community Hall to answer questions from about two dozen North Idahoans. 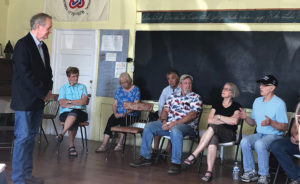 The initiative to raise Idaho’s minimum wage took up a large part of the half-hour conversation. Some attendees asserted that it could be a viable solution for combatting Idaho’s high poverty rates, but Crapo said he believed investing in economic development would be a better long-term fix. When asked about his opinion of the Trump-led trade tariffs against China and subsequent trade war, which helped propel a steady decline in the Dow Jones Industrial Average over the month, Crapo said he was both “happy and concerned.” He said he believed positive change was being made, but that the shift toward more stable trade relationships can sometimes be a “painful” process. As of noon on Aug. 7, the Dow Jones Industrial Average had fallen more than 1,145 since the first of the month.

Crapo, who opposes net neutrality, also addressed big data mining and censorship on the part of internet giants like Facebook and Google, noting that federal legislators are working to give internet users more rights and characterizing the issue as “difficult and complex.” Overall, Crapo shared his belief that nothing will be done without reaching across the aisle.

“Nothing is going to happen unless it’s bipartisan,” he said, “and that’s the way it ought to be. That’s the way our country works, and we are getting very close on a lot of these fixes that we need.”