North Idahoans are making note of clearer skies so far this August, but with fire activity ramping up this week, the smoky haze of summers past appears to be moving in. 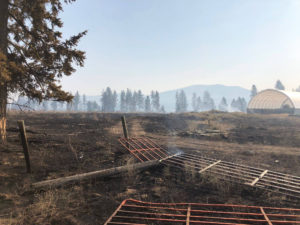 Aftermath of the Bandy Fire near Spirit Lake. Photo by Id. Dept. of Lands.

A grass fire Aug. 5 near Spirit Lake quickly grew thanks to high temperatures and changing winds, resulting in the first local fire of the season to prompt evacuation orders. The fire was reported around 2:30 p.m. and, by 5:30 p.m., the Bonner County Sheriff’s Office advised residents on several roads near Bandy Ranch — the fire’s origin — to evacuate the area.

BCSO lifted evacuation orders around 7:45 p.m. and Timberlake Fire reported on Facebook at around 11 p.m. that the fire had been contained. The blaze grew to 140 acres, IDL reported, and no structures were damaged. The cause of the fire is under investigation.

It’s the first major event in what is expected to be a fairly average regional fire season. The National Significant Wildland Fire Potential Outlook, released monthly by the Boise-based National Interagency Fire Center’s Predictive Services unit, reports “an active but compressed season is expected across the West.”

Moderate drought conditions exist throughout the Inland Northwest, but periods of rain and cooler temperatures in early July have “lessened the drought stress in the vegetation,” according to the August report.

Maddox said this year’s ERC is showing average fire danger — a change from the above average danger over the past several years, she said.

Aside from the Bandy Fire, IPNF reported Aug. 6 that several small fires have burned across the Panhandle in 2019, but “early detection and suppression, coupled with an average fire season, have kept the fires small.”

The Bonner County Sheriff’s Office released a fire weather watch Wednesday stating possible thunderstorms across North Idaho through Saturday, Aug. 10. With “abunant lightning” possible, as well as gusty and erratic winds, more fire activity could be on its way.

By this time last year, the fire outlook was substantially worse and the Cougar Fire, located five miles east of Hope, was on its way to burning more than 7,000 acres.

Smoky air during recent summers has proved a serious concern. On Aug. 19, 2018, Sandpoint experienced Air Quality Index readings into the 300s — classified as “hazardous” by the EPA. Sandpoint registered at about 60 AQI on Aug. 6, 2019, considered “moderate” air quality. “Good” AQI is between 0-50 on the EPA’s scale.

Older people, children and people with preexisting health conditions — including respiratory and heart issues — are more sensitive to smoke pollution, according to the EPA. Visit airnow.gov for current air quality readings.