In a press conference, the task force delivered statements from Idaho politicians, human rights activists and faith leaders sending one unified message: Racism and bigotry are not welcome in Idaho. The conference follows an increasingly aggressive campaign of flier distribution with racist messages against black, Jewish and Hispanic people, as well as targeted messages against local politicians, human rights activists and journalists. 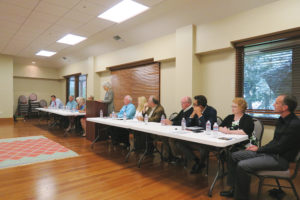 “Hate is an attack on our community’s health,” said Sandpoint Mayor Shelby Rognstad. “Acts of hate impact more than the victims, they also torment the community, leaving community members feeling vulnerable and afraid.”

Recent fliers have piggy-backed on local controversies over refugee policy, claiming a conspiracy existed to bring refugees into Sandpoint. Rognstad used the conference to once again refute the allegation, saying city representatives have not had a single conversation toward that end.

“Sandpoint could not support a resettlement program because it lacks sufficient economic, health care and cultural resources that the U.S. Office of Refugee Resettlement requires to support such a program,” he said.

Since late spring, an unknown person or group of people have distributed fliers, which often promote one of the most widely-trafficked white supremacist websites on the internet. The racist messages are usually left on cars, tossed from vehicles into yards or pinned to bulletin boards during the night when the chance of being seen is low. The fliers follow a series of robocalls two years ago during the Sandpoint mayoral election, which claimed Rognstad would bring black individuals into town if elected.

The messages have become persistent enough that Gov. C.L. “Butch” Otter issued a response this week.

“We have dealt with white supremacists and other groups fueled by hatred before,” Otter said. “We told them then — as we continue to tell them now and in no uncertain or ambiguous terms — they are not wanted here and will never be welcome here.”

“This is simply unacceptable and cowardly behavior,” she said. “In our country and our state, we debate the issues civilly and in the light of day, not cloaked in anonymity. We don’t threaten violence in our disagreements.”

Other North Idaho human rights organizations, which resisted Aryan Nations activity in the ‘70s, ‘80s and ‘90s, turned out in solidarity for the Bonner County Human Rights Task Force. Tony Stewart of the Kootenai County Task Force on Human Relations praised the Bonner County task force for its work.

“Because of this organization, this community is much safer than it would have been,” he said.

It was a message echoed by Christie Wood, president of the Kootenai County Task Force on Human Relations.

“Your mayor is correct that the fliers were distributed to spread fear, but what we see is the strength of your task force … and citizens,” she said.

Shawn Woodward, superintendent of the Lake Pend Oreille School District, urged the community to send a message of support for everyone regardless of race, age, gender, religion or sexual orientation.

“It is my hope that our community can rally around similar ideals in a time when a small percentage of our population is carrying out their agenda of hate and fear,” he said.

“I fear that the people responsible for the fliers are living in a dark shadow of their own making,” said Graves.

This isn’t the first time the Bonner County Human Rights Task Force has taken a stand against racism. Formed in 1992 in response to the Aryan Nations, the task force worked against efforts by white supremacists to foment community divisions. Members said they are just as committed to resisting racism in its modern incarnations.

“We want the community to know that the messages on these fliers are dangerous,” board members said in a statement. “When you see them, you should turn them into the police.”