Reclaim Idaho’s education funding ballot initiative effectively met its end July 30, when the Supreme Court of the United States issued a stay on the group’s lawsuit against state officials, who they allege failed to accommodate signature gathering efforts amid the ongoing novel coronavirus pandemic.

“I have very bad news to share,” Reclaim Idaho co-founder Luke Mayville wrote in a newsletter July 30. “The United States Supreme Court has decided to block our signature drive, and their decision is harsher and more damaging to our campaign than anyone anticipated.”

This is the latest in a legal battle that began in June, when Reclaim Idaho filed a lawsuit claiming that Gov. Brad Little and Secretary of State Lawerence Denney violated the group’s First Amendment rights by failing to offer an alternative to in-person signature gathering during the COVID-19 pandemic. 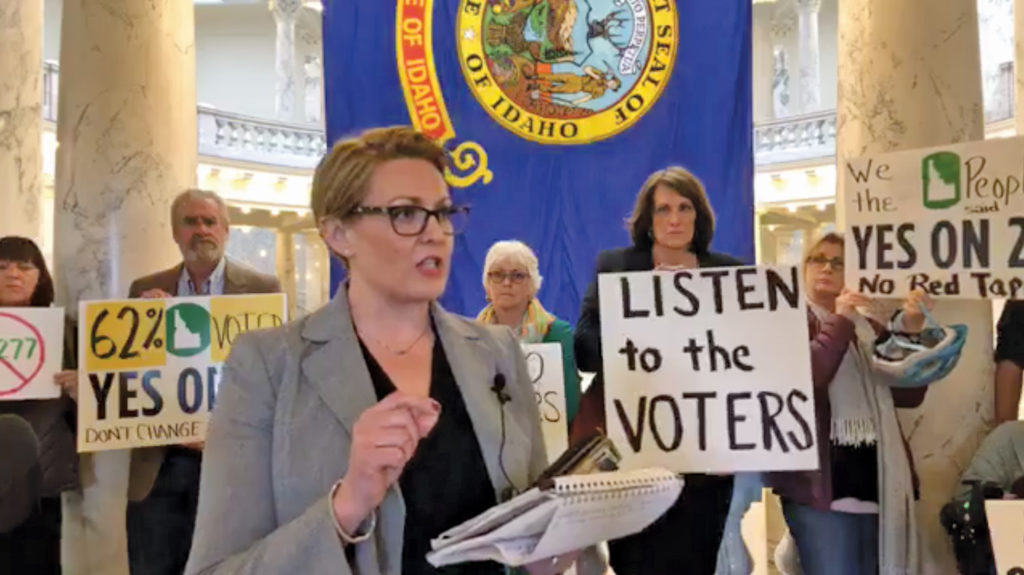 A still from a Facebook Live video in which Reclaim Idaho executive director Rebecca Schroeder addresses a crowd at the Boise Capitol building regarding Reclaim Idaho’s Medicaid Expansion initiative.

U.S. District Judge B. Lynn Winmill ruled in favor of the grassroots organization, and gave the state a seven-day window in which to decide whether the signature drive could continue online or if the initiative would automatically qualify.

State officials chose neither option, instead requesting a stay of proceedings. Winmill denied the stay, and instead took it on himself to make the state’s choice: Reclaim Idaho could collect signatures electronically.

The group did just that, while the state went first to the 9th U.S. Circuit Court of Appeals and then the Supreme Court to request another stay. The highest court in the land granted that request July 30, putting a stop to Reclaim Idaho’s efforts. The 9th Circuit decision is slated for Aug. 13, according to Idaho Education News, so the SCOTUS ruling stands in the meantime.

“I am pleased that the Supreme Court upheld Idaho’s sovereignty over its election and initiative processes,” Little told Idaho Ed News. “It is important that initiatives follow the laws set by the Idaho Legislature so we can ensure those initiatives that get on the ballot are legitimate and have significant support throughout Idaho.”

The Invest in Idaho initiative would have allocated about $170 million in taxes on Idaho’s wealthiest citizens to fund K-12 education annually. The movement gained steam in recent months, after Little announced $99 million in education funding cuts across the state.

“We are shocked that the Court has made this extraordinary intervention rather than let the normal appeals process run its course,” Mayville wrote. “It is deeply disheartening that the highest court in our nation has decided to clamp down on a grassroots campaign in Idaho — a campaign made up of thousands of ordinary citizens who are simply trying to make Idaho a better place for their children and grandchildren.”

Mayville said that though the path forward is “uncertain,” the court’s decision combined with the state’s repeated attempts to halt the initiative make getting Invest in Idaho on the November ballot appear impossible. Due to these factors, Mayville said, “we see no other option than to suspend our signature drive.”

The decision doesn’t spell the end of Reclaim Idaho, however, which has built its platform around “strong public schools, protected public lands and health care for working families.”

“Reclaim Idaho began when 50 people showed up on a winter morning in North Idaho to knock on doors for a local school levy. Since then, we’ve experienced many victories and a few defeats,” Mayville said — one of those victories being the successful Medicaid expansion initiative of 2018.

“As long as there are Idahoans willing to show up for this work, we’re not going anywhere,” he added.