Public interest in the proposed Scotchman Peaks Wilderness shows no sign of waning, with hundreds turning out Tuesday night for a second public meeting at Clark Fork High School.

Staffers for U.S. Sen. Jim Risch, R-Idaho, said they organized the event to follow up on a packed meeting in January. Throughout the three-hour open house, Risch’s staffers, U.S. Forest Service personnel and other volunteers distributed information about the proposed wilderness plan. They also collected comments to gauge support for the proposed legislation, which will influence Risch’s decision on whether or not to re-introduce the bill in Congress. 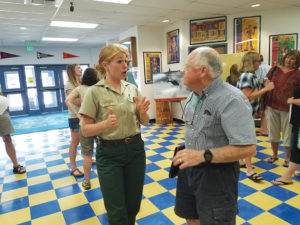 “During the meeting in January, folks said they felt left out of the process, so the senator said, “Let’s do another meeting in Clark Fork,” said Darren Parker, a member of Risch’s Washington, D.C., staff.

According to organizers, the meeting was designed to answer common questions that arose during the January meeting. While some residents were concerned about a protective buffer around the wilderness area, Forest Service employees assured attendees that no such buffer would be used for Scotchman Peaks. They also said that their ability to protect against fire, insects or disease in the wilderness area wouldn’t be impacted, nor would non-motorized activities like hiking, horseback riding, skiing, camping, shed hunting and berry picking. Motorized access to the wilderness, on the other hand, would be prohibited — a restriction already in place under the region’s status as recommended wilderness. Search and rescue operations and other emergencies are the exception to the rule, with helicopters and other vehicles permitted in case of emergency.

The meeting attracted a broad range of attendees ranging from firm opponents to enthusiastic supporters. By 6:15 p.m., with 45 minutes remaining in the meeting, around 250 people had signed in at the front desk. The emphasis this time was to take advantage of the open house format, ensuring in particular that enough Forest Service employees were present to answer questions about woodland management issues.

“There are definitely questions over a full spectrum of issues, including a lot of questions about the boundaries,” said Risch staffer Sid Smith. “Those are the kind of things we hoped people would ask about.”