Coal has become an emblem of America’s divided culture.

President Donald Trump wields the fossil fuel as a symbol of the forgotten working-class man. But for environmental progressives, the coal industry is the standard-bearer of backward-thinking energy policies. It’s a political divide that places utility companies at a crossroads as they plan their long-term energy investments, and Avista Utilities is no exception. 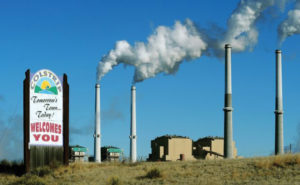 The Spokane-based utility company is in the process of preparing its integrated resource plan, a 20-year outlook on generating stable and cost-effective power service. Updated every two years, the latest iteration of the plan will be submitted to the Idaho Public Utilities Commission at the end of August. According to IRP planning documents, Avista intends to hold steady with its investment in Colstrip, a Montana coal-fired power plant.

“As a result of (our planning process), we are not planning to increase our investment in coal, and we have not decided to add more coal to our generation mix,” said Bruce Howard, Avista director of environmental affairs.

While the decision effectively amounts to maintaining the status quo, conservation organizations like Idaho Conservation League call for a more aggressive shift away from coal. According to Emily Cleveland, community engagement associate for ICL’s Sandpoint branch, Avista’s Colstrip investment could have unforeseen consequences as pressure ramps up in Pacific Northwest cities to divest from coal.

“If Avista doesn’t heed the signs on the wall, we believe the ratepayers will have to pay the price when other owners have divested and Avista is left holding the bag,” Cleveland said.

Some Colstrip stakeholders are under more pressure to leave coal behind than others. Following President Donald Trump’s decision in June to withdraw the U.S. from the Paris Climate Accord, the Seattle Times editorial board published a call for Puget Sound Electric to end its investment in coal.

“There is no hope for now of federal action on the human-caused threat of climate change,” the editorial board wrote. “We’ve got to address it locally. Ending reliance on coal is a perfect place to focus.”

Talen Energy, meanwhile, notified other owners of Units 3 and 4 last year that it intends to exit Colstrip operation by 2018. The Missoulian reports that Talen officials called the company’s continued operation of Colstrip “not economically viable,” largely due to the abundance of cheap natural gas in the marketplace.

Despite other owners’ ebbing faith in Colstrip, Avista remains committed to its investment. And unlike many of its fellow Colstrip stakeholders, the company is under minimal pressure from lawmakers to divest — particularly in Idaho.

“This doesn’t change our view on Colstrip, the value of Units 3 and 4, and how it works with our energy portfolio into the future,” Avista spokeswoman Mary Tyre told the Missoulian following Talen’s decision to withdraw.

For Avista, maintaining stable, low-cost rates is a driving concern in IRP drafting. According to Howard, the construction of a new power plant, which divestment from Colstrip may require, is a decision of no small financial consequence.

“It’s a long-term decision,” he said. “We continue to push out further into the future the need to build a new power plant. The question is: can we secure long-term contracts for our customers that (include) cheaper rates.”

According to Howard, the nationwide uncertainty surrounding energy policy is a factor in that decision-making. That’s why the IRP is re-examined every two years, he said.

“The plan is there, and then day in and day out, the real world continues on, and we have to re-assess it,” he said.

While Colstrip remains a part of Avista’s resource plan, Howard said the company is also investing in renewable resources like the Palouse wind farms, as well as biomass and solar energy operations. He said Avista also runs a successful energy efficiency and conservation program, which provides education and incentives toward reducing energy consumption.

“We’ve been one of the most aggressive utility companies in encouraging conservation,” he said.

But when it comes to Colstrip, Idaho Conservation League staffers believe the plant could soon become an albatross around Avista’s neck. Cleveland hopes that residents will contribute to the public process when Avista submits its IRP to the Idaho Public Utilities Commission at the end of August.

“As a third of Avista’s customer base, North Idaho has a right to demand that Avista consider the risk and cost to ratepayers like us,” she said.