Levels on the Pend Oreille River and Lake Pend Oreille are now predicted to meet or exceed 2011 levels, according to a Wednesday announcement from the U.S. Army Corps of Engineers. 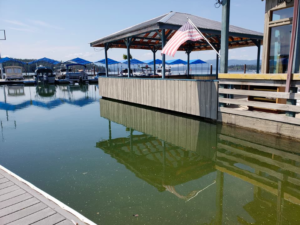 CHOP Waterfront Bar & Grill is preparing for the worst in Hope. The establishment was evacuated Wednesday and will remain closed until further notice. Photo courtesy of Facebook.

The National Weather Service issued a flood warning Sunday for Lake Pend Oreille at Hope, which is the Army Corps’ choice location for measuring the lake level. The Hope gauge is less affected by weather and river flows than other gauge locations.

The NWS predicts the lake will surpass flood stage by late Thursday morning and continue to rise to nearly 2,065 feet by late Sunday morning.

The predicted flooding is likely to put some low land areas and driveways in the Clark Fork and Pack River Valleys underwater. Parking lots at Scenic Bay Marina in Bayview, the Powerhouse in Sandpoint and the Trestle Creek recreational area in Hope will likely be at least partially underwater. The NWS also predicts most dock ramps around the lake will be underwater.

“The other year we’ve been (comparing this year to) is 1997,” said Army Corps Water Management civil engineer Logan Osgood-Zimmerman.

Also in their Wednesday announcement, Army Corps officials advised boaters on Lake Pend Oreille to watch out for floating or submerged logs or debris due to high runoff flows.