The Bonner County Waterways Subcommittee hosted a public workshop Monday to gather opinions on possible solutions to local wake damage, but the discussion revolved largely around placing blame on the real wake-creating culprits. 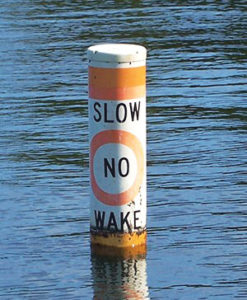 Currently, there is a 200-foot no-wake zone law in Bonner County. Despite the regulation, lakefront homeowners are still seeing the effects of wake on their properties, some reporting tens of thousands of dollars in continued damage.

Bonner County Parks and Waterways Director James Shannon explained possible solutions discussed by the subcommittee and then administered a survey of the audience to record their support or opposition to each solution.

• “Fix-it” tickets, where boaters can avoid fines by going to a class

• Further fund the “Ride the Core” campaign, which encourages boaters to stick to the center of waterways rather than the shore

• Establishment of “wake surf areas,” which would confine wake-enhancing sports to certain areas

• Prohibition of wake surfing on the river west of Dover

Shannon noted that the subcommittee has not come to a unanimous decision on any solution, and wants to hear different ideas from the public.

Results of the survey displayed opinions across the board. Prohibiting wake surfing west of Dover exemplified the opposing sides at the meeting, as the “strongly agree” and “strongly disagree” responses were nearly split down the middle. Those who couldn’t attend the meeting can take the survey at www.bonnercountyid.gov/recreation.

Lakefront property owner Brent Leedle said he was concerned about the lack of marine patrol near his home. He said he’s observed that people follow the wake law when BCSO boats are present, but the good behavior doesn’t last.

“As soon as the lake nanny goes away, everybody does what they want,” he said.

Lt. Ed Jochum, head of the marine division, said it’s no secret that the sheriff’s boats are easy to see from a distance and laws are not always followed when no one’s watching.

“These things are hard to enforce because we have one or two boats on a 26-mile river,” he said. “We have these big boats that you can see from two miles away, so of course everybody behaves.”

Conversation at the workshop also focused around what was causing the wake damage in the first place. Though most agreed wake-enhancing boats were a problem, some argued cabin cruisers and storms were to blame. Tempers flared at several points during the workshop, during which times an outside facilitator and Shannon had to get things back on track.

“The problem is well established, so let’s talk about solutions,” Shannon said.

Those with questions and suggestions for further solutions to the county’s wake issue should call the Parks and Waterways Department at (208) 255-5681 ext. 4, or email [email protected]