The Culver’s Crossing affordable housing project cleared its first, though crucial, hurdle April 5, when members of the Sandpoint Planning and Zoning Commission voted unanimously to approve its preliminary development plan.

Hart described Culver’s Crossing to P&Z Commission members as “a collaboration of second-generation native Nancy Hadley and the Bonner Community Housing Association,” offering single-family and townhomes, as well as a three-unit multi-family dwelling, specifically geared toward middle income workers, the elderly and/or disabled — “those who have been shut out” of home ownership, he said, by the skyrocketing prices of real estate throughout the nation, but especially felt in low-wage North Idaho.

“I don’t need to tell you that we have a housing crisis,” Hart said April 5. 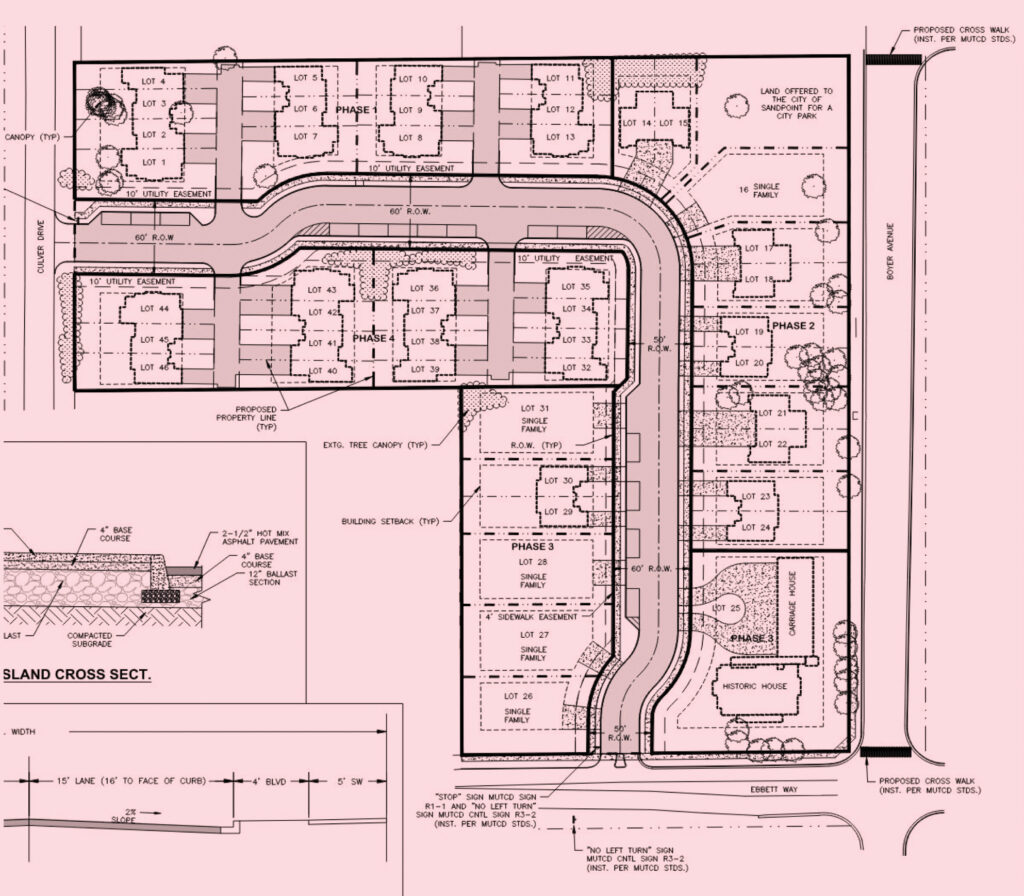 In an interview with the Reader on March 28, Hart said, “This will be the first time, as far as I know, that a private person is coming forward to present on affordable housing,” and stressed that Culver’s Crossing would not be available to investors or speculators. As he told the Reader, Hart reiterated to the P&Z Commission that, “if you’re an investor or speculator, don’t contact us.”

Homes in Culver’s Crossing would be designed with a mix of styles, intended to replicate the aesthetic of traditional north Sandpoint, with mature trees, nonlinear streets, alley-loaded lots, a greenbelt and park space.

Hart said the goal is to offer at least 60% of the homes under the local housing authority. The first phase would include construction of 13 units, and already more than 100 people have applied.

Rather than deed restricted, Culver’s Crossing homes would be income-based, geared toward residents who make between 60% and 120% of the area median income, which is pegged at about $60,000 per year.

The housing program incentivizes buyers to hold onto their homes for at least four years. A buyer is free to sell their home in Culver’s Crossing at any time, but Hadley has the right of first refusal to buy back the home for its original sale price, plus appreciation for inflation, depending on how many years the buyer has been in the home. On the first day of the fifth year of occupancy, the homeowner “can do whatever they want,” Hart said.

In the meantime, construction and labor costs will play a part in getting the homes built, and the longer the project sits on the drawing board the more expensive it will get.

“We’d like to do as much as we can for the community, but this is a privately-funded project; this is not subsidized housing, so it’s very closely tied to how much it costs to build a home,” Hart said, urging the commission to approve the preliminary development plan and noting that rising income levels also push housing prices higher.

Testimony was sparse at the hearing, though City Clerk Maree Peck said 40 city residents conveyed their support in writing, as well as 12 residents outside city limits.

Brad Hanson, who resides in Sandpoint but spent 25 years as a home builder in Boundary County and 10 years on the P&Z Commission in Bonners Ferry, testified in person that, “I’ve seen a lot of proposals come down the pike for subdivisions and various housing developments, and I’ve seen a lot of attempts at these sort of things over the course of the years. … I’m extremely impressed with what these folks have put forward.”

Hanson referred to Culver’s Crossing as “a measured response.”

“It’s approaching a very huge problem that I think is very acute,” he said, adding that the housing crunch is more severe in Bonner than it is in Boundary County.

“I find it a fantastic proposal,” he added.

Representing a number of neighboring property owners, resident Karen Bishop spoke against the proposal, citing worries about water drainage, deviations from the City Code requiring sidewalks, the lack of setbacks and the need for a traffic impact analysis before the final phase of construction.

“This directly impacts my property and home,” she said.

Carissa Lonzisero, of Sandpoint, also questioned language in the proposal that stipulated homes would only be offered to residents with jobs that benefit the community and are citizens in “good standing.”

She described that verbiage as a “slippery slope” “that could potentially lead to discrimination.”

Hart responded that the “good-standing” language was an “error on our part,” and that has since been changed in accordance with requirements for fair housing. As for the drainage concerns, he said that will be addressed by the stormwater management plan, which will come later in the process.

The deviations from City Code contained in the PUD request, he added, “are not unusual” and “typical and have been granted in the past.”

Hart said North Boyer is poised to become an even more central arterial and housing hub than it already is, pointing to the University Place development on the east side of Boyer Avenue, and Culver’s Crossing is proposed to be a part of that growth.

However, he said, “It is possible to build affordable housing and follow the rules,” and this project is intended to be a case in point of how to do it.

The project will return to P&Z with its final development plan and approval of a preliminary plat before a recommendation to Sandpoint City Council. After that, the City Council will take action on the preliminary plat, then development and infrastructure construction can commence. Council would need to take action on the final plat, then building permits could be issued.

Hart said the hope is to have that process completed in time to deliver the first phase of homes by 2023. Yet time is of the essence.