In 1910, a passenger moving to Sandpoint by way of the rail may, upon glancing out the window, have seen a pennant waving gently in the breeze to welcome them to town. The 120-foot-tall pole was not graced with a flag, though, but with needles.

At the turn of the century, most of the trees in the Sandpoint area had been cut down to make way for the growing population of residents. The timber was used first to build houses, saloons and farms, and eventually churches and schools. By 1910, all that remained were the scrawniest of the original trees and a smattering of new plantings in people’s yards.

However, in photos of Sandpoint from around 1905-1910, a single sliver of bark and needle stabs defiantly into the air, floating high above the surrounding structures and landscaping. The tree looks at first glance like a larch, but in a photo taken during winter, it still bears its needles. It could possibly be a grand fir, though in the fuzzy photos of the time, it’s hard to tell.

According to Bonner County Historical Society researcher Dan Evans, “If you extended Fir Street and Second Avenue to where they would intersect, the tree would be in that general area.” That is, close to where the Healing Garden resides today. 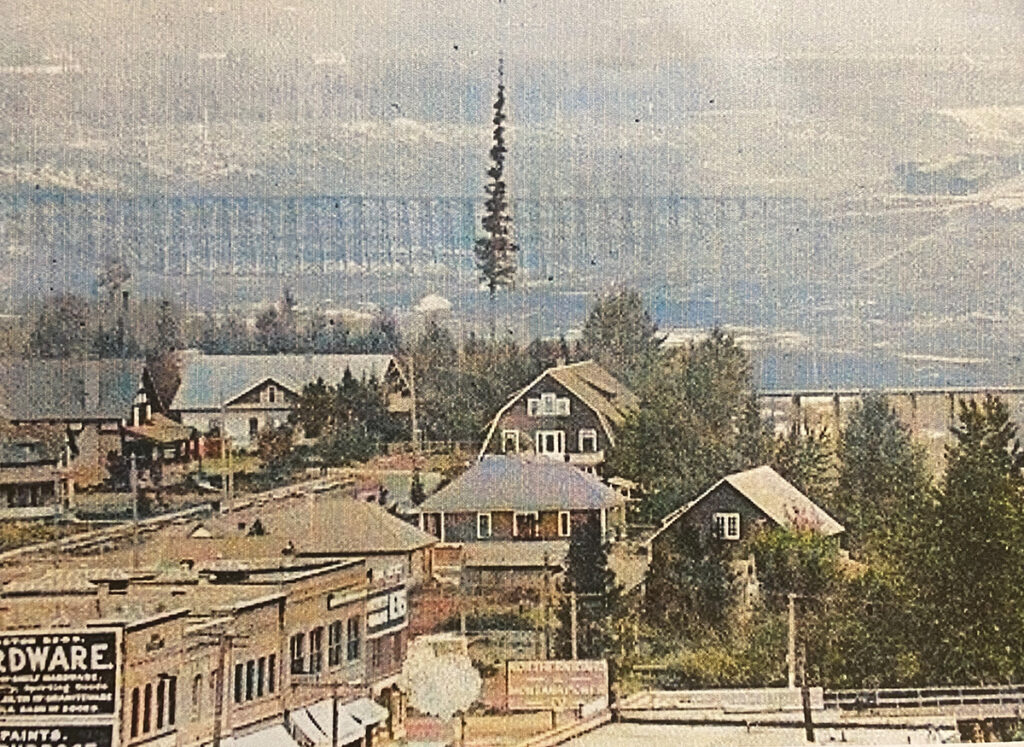 A photo of the tall fir tree in 1905 looking north from First Avenue. Photo courtesy of BCHS.

Before the Humbird Mill built Milltown houses in the vicinity, it was an undeveloped area. The tree may even have been partially submerged at high water. For many years, the beanpole was not worth the effort of the timbermen, and so it remained, a sentinel watching over Sandpoint.

A blurry photo from 1894 shows the soaring tree surrounded by a denser forest, with a few others challenging it for the height record. By the mid-1920s, no sign of it remains, though whether it fell down or was cut remains a mystery.

Trees are preserved for a number of reasons — their age and beauty, but also their crucial role in preserving fragile habitats. Pockets of ancient trees can still be found deep in the forests of Bonner County. When trees were preserved in populated areas, though, human sentimentality was sometimes the driving force.

Such was the case with one small larch tree growing in the heart of downtown. An article in the Pend Oreille Review on June 6, 1906 laments, “the tamarack tree which has stood in the road at the intersection of Main and First streets was cut down Saturday, much to the regret of the old timers. The landmark has been allowed to stand as a matter of sentiment, but there was a feeling that it might some day be the cause of a bad runaway mixup.”

Photos from the time show the little tree, hardly 20 feet tall, standing proudly in the middle of First Avenue, with the tracks from years of traffic veering around it. Perhaps the original street planners thought it would serve in lieu of a lane divider. Perhaps it stood as the original Sandpoint Christmas tree. All we can do now is wonder, as no other records remain. But from the deeply felt newspaper fragments we have, we know it was a beloved little tree.

Perhaps no tree in recent memory was more loved than the rope swing tree over Sand Creek. During construction of the Highway 95 byway, all of the trees on the east side of Sand Creek were cut down, including a large black cottonwood that leaned out over the creek, inviting intrepid youth to hang a rope swing from in its branches. A guide to Sandpoint’s tree species, published by the city of Sandpoint’s Tree Committee in 2009, calls the cottonwood an “outstanding” specimen that served “at least two generations of children — and some brave adults” who plunged from its rope into the water below.

In the mid-2000s, when the byway project was in the planning and early construction stages, many residents opposed the project because of how significantly it would change the character of the downtown. Numerous editorials were submitted to the local papers reminiscing about the beauty of Sand Creek before the project began. They show the deep nostalgia and regret that the tree and its removal evoked.

Perhaps Bonner County Daily Bee then-Staff Writer Carolyn Lobsinger best captured the nostalgia tied to the tree in an article from 2004: “People who visit Sandpoint on vacation often stand on the Bridge Street bridge and watch as kids swing on a rope and drop into the chilly waters of the creek. They walk away feeling that they have been privileged to glimpse a moment of Norman Rockwell’s Americana.” 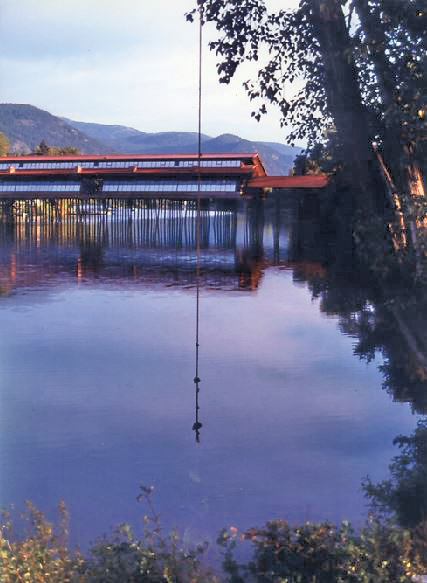 The rope swing over Sand Creek, looking north toward the Cedar St. Bridge, before the tree was cut down. Photo taken by and donated to BCHS by Erik Daarstad.

Trees have always astounded us and played a special role in our communities and our lives. The trees we have preserved have given the town of Sandpoint character for more than 100 years. As the town grows and changes, favorite trees come and go. The trees planted today may become the beloved landmarks of the future.

In an eloquent letter to the mayor published in 1995, titled, “Neighborhoods are more than land,” longtime local Dan Shook wrote about all of the moments that make up our home. Nestled in his words, he wrote, “It’s trees that were planted when the kids were born and grass that won’t grow under a rope swing.”