Two Sandpoint Police Officers were shot Monday morning while responding to a call for services at 3:10 a.m. The shooting took place at Ridley Village in Sandpoint.

According to the city of Sandpoint, officers Michael Hutter and Eric Clark were shot and suffered non-fatal injuries after making contact with the reporting party. During contact, the suspect stepped out of the residence and began firing at officers. Both officers on scene were struck twice — Hutter in the leg and chest and Clark in the neck and left hand. 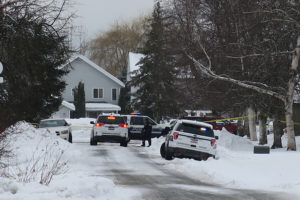 Hutter and Clark were fired upon within seconds of arriving on the scene by suspect Brandon Kuhlman, 28, of Sandpoint. After the officers secured cover, Kuhlman fired upon them a second time. He was found deceased at the scene by investigating officers. An autopsy will be conducted on Tuesday.

“I do know that we did return fire, but that’s all I can tell you,” said Police Chief Corey Coon in a press briefing. 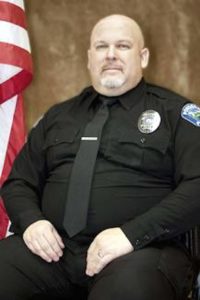 “Both officers involved are expected to recover,” said Coon during a press briefing.

Per protocol involving a Sandpoint Police Department, the Coeur d’Alene Police Department is leading an incident task force to investigate the officer-involved shooting. More details are expected to emerge in the coming days.

Ridley Village is in close proximity to Forrest Bird Charter School, which has closed today. Sandpoint High and Middle Schools are open, but the schools initiated lock-out procedures, as has nearby Washington Elementary School.

“Lock-out means the kids come in, but everything is locked behind them,” said Coon. “This is to make the school more secure.” 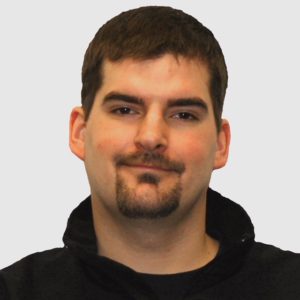 “I knew from about 6 a.m. that, according to Chief Coon and our school resource officer that the situation was very much contained,” said Woodward, who also sent out a mass communication to parents and staff at 8:10 a.m. making them aware of the police activity. “There was no risk to staff or students.”

“The decision to close came from a conversation with dispatch,” said Greve. “Because of the proximity of the incident, and the timeline in terms of when students would be showing up on campus, we did not want our kids anywhere near that situation. Ridley Apartments are just kitty corner to us.” 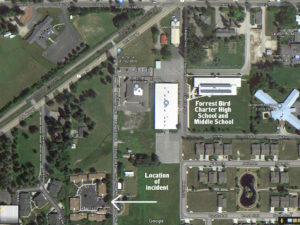 A map of the location of the shooting. Courtesy of Google Maps.

Greve added that she was “very glad everyone’s safe and hope the officers are okay.”

This story is breaking and will be updated.