County commissioners will reconsider the wording of the Scotchman Peaks advisory vote — slated for the May 15 primary ballot — at their Tuesday business meeting. 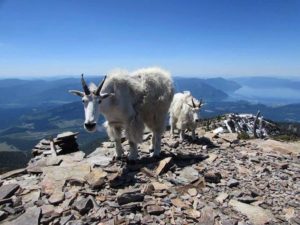 The Scotchman Peaks area is home to several mountain goats, which no one should feed. Photo by Leslie Kiebert.

Commissioner Dan McDonald said they are having an open conversation about the vote’s language at the request of Samuels resident Dan Rose.

In the commissioner’s Feb. 20 business meeting, the advisory vote was approved in this form: “Do you favor Senator Jim Rischs’ (sic) proposal for congressional designation of a 13,960-acre Scotchman Peaks area in Bonner County?”

Rose asked commissioners why the words “federal wilderness” were not used in the question, McDonald said. The commissioner said they are revisiting the vote in Tuesday’s meeting simply to “respond to a member of the public.”

“There is a good chance we won’t be changing the language but we will go ahead and have a discussion about it,” he said in an email Friday.

The commissioners will discuss changing the question’s language at 9 a.m. Tuesday, March 6 at the Bonner County Administration Building.