By Zach Hagadone
For Boise Weekly
(used by permission)

Among the stated goals of President-elect Donald Trump has been the renegotiation of, or withdrawal from, a number of international trade deals. When news of his election victory over former Secretary of State Hillary Clinton spread around the world Nov. 8, financial markets were in an uproar and trading partners like Canada and Mexico started to fret. 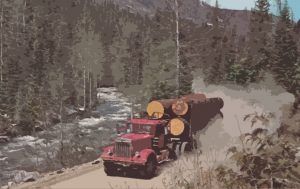 In this vintage photo by Bill Hawkins, a logging truck drives down a mountain road in North Idaho.

In the hours and days following Trump’s win, markets stabilized and even gained ground. Still, as economists struggle to forecast what a Trump presidency will mean for global trade, one agreement at the heart of a long simmering trade dispute with Canada is already hanging in the balance. How it is resolved—or not—will have an impact on Idaho.

According to a University of Idaho analysis, the sales value of the forest products industry in Idaho was estimated at $3.5 billion in 2013 and directly employed more than 10,500 workers. Exports supported another 9,000 positions via indirect employment. Jobs in the sector pay well: 27 percent higher than the state average across all other industries.

Those jobs have long been imperiled by trade policies that allow Canadian timber companies to undercut U.S. competitors. In 1995, shortly after passage of the North American Free Trade Agreement, it was estimated Canadian softwood lumber—the type of wood used to build homes, for instance—accounted for 39 percent of the U.S. market. Policymakers blamed subsidies offered by the Canadian government that allowed its producers to pay fully three times less per million board feet than those in Idaho, Oregon and Washington.

Exacerbated by other factors like increasing technology, the influx of below market-priced Canadian lumber helped devastate the timber industries in the Northwest in the 1990s and early 2000s. In 2003, NAFTA officials approved U.S. tariffs on Canadian softwood—a move that was applauded by then-Congressman C.L. “Butch” Otter, who represented Idaho in the House.

Three years later, the parties agreed in 2006 to the so-called Softwood Lumber Agreement.

The SLA, which was renewed for two years in 2013, refunded $4 billion in U.S. anti-dumping and countervailing duties and divvied up another $1 billion between the feds and the forestry industry. It also established an export charge to be paid by Canadian producers should prices fall below a given level and barred the U.S. from filing any further anti-dumping cases.

Those provisions expired on Oct. 13, 2015 and, more than a year later, no agreement has been put in place to alter or renew them.

In a letter headed by U.S. Sens. Ron Wyden (D-Oregon) and Mike Crapo (R-Idaho), 18 other senators from both political parties pressed President Barack Obama on Oct. 21 to act on a commitment with Canadian Prime Minister Justin Trudeau to secure a new agreement that would stabilize trade policies regarding softwood lumber.

“Only this type of agreement will allow U.S. lumber mills the opportunity to compete fairly in our own market and to make the investments necessary to grow the domestic industry to its natural levels of production and employment,” they wrote, concluding, “Hundreds of thousands of U.S. jobs and thousands of U.S. rural communities depend on fairness in trade in softwood lumber. That is why we will continue to urge you, and any future Administration, to seek a fair, effective, and sustainable agreement with Canada on softwood lumber trade.”

While Obama has made clear his desire for some kind of SLA, it is widely regarded as unlikely the issue will be resolved before his successor is inaugurated in January 2017—potentially making it the first U.S.-Canada trade issue Trump will face. Meanwhile, the president-elect’s staunch protectionism has aroused fears that trade disputes between the close neighbors may become the new norm.

According to an Oct. 26 report from Reuters regarding the absence of a new SLA, U.S. Lumber Coalition Chairman Charlie Thomas said, “the U.S. industry will eventually have no choice but to use our rights under U.S. trade laws to offset the unfair advantages provided to Canadian industry.”

That could lead to the kind of escalation that experts say can result in trade wars.

“If we were to stumble into a trade war,” said U of I economist Steve Anderson, “we have no way of knowing how disruptive that would be to industries inside Idaho.”