Interview with The Devil Makes Three

Hailing from Santa Cruz, Calif., The Devil Makes Three is no easy band to categorize. The three-member crew packs a varied style that draws from just about every corner of Americana music, from blues to folk to country. One thing is for sure—members Pete Bernhard, Lucia Turino and Cooper McBean use their influences as ingredients, cooking up a sound that’s entirely original. We caught up with Bernhard to ask him about music, life on the road and the upcoming co-headline show with bluegrass band Trampled By Turtles. 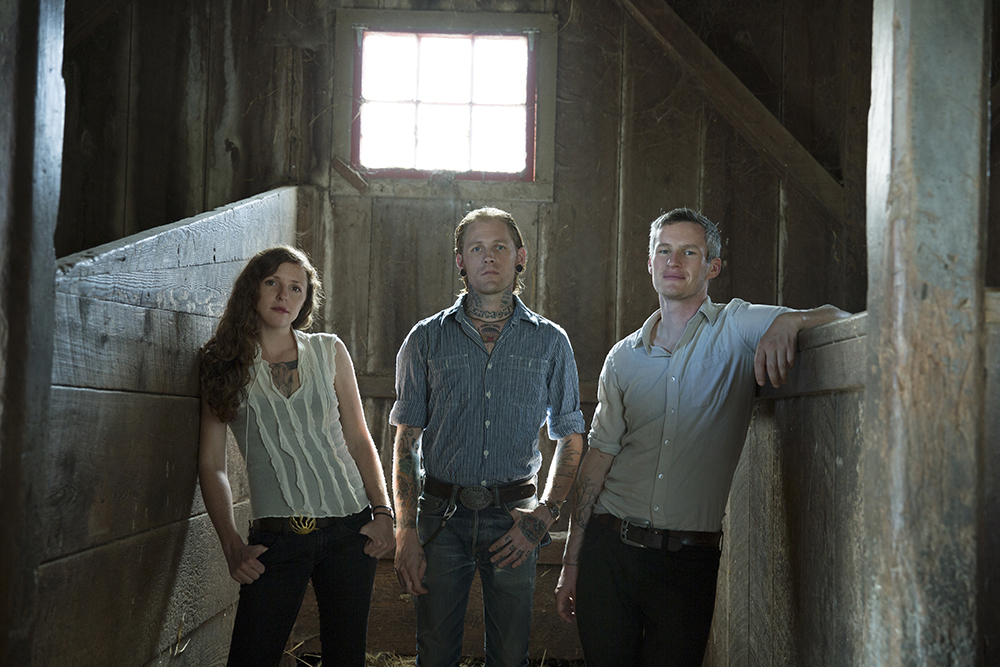 First of all, thanks for taking the time to talk with us today. I imagine it can be tough to work these interviews into a  touring schedule.
Yeah, it’s true, but I’m actually enjoying some time off right now, so it’s no problem at all. We just finished a tour with Old Crow Medicine Show and before that, we were in Europe, so we took a little break after that to work on some new material.
How did the tour go with Old Crow Medicine Show?
Oh, it went great. It was really fun. We ended up playing some songs with them in the show, and it was a great time. We’d been trying to make that happen for a while.
And now you’re preparing for a series of shows with Trampled By Turtles, including the one here at the Festival.
Yes, we’ve done a bunch of shows with Trampled, and now we have the co-headlining tour coming. I think it’s going to be fun. We’ve played in their hometown and in San Francisco with them, plus a couple other places. … We’re finally hooking up to do an actual run together, and I think it should be a great match.
You share some stylistic similarities with Trampled By Turtles, but overall, your bands are very different. Could you tell me more about your bands’ history and collaboration together?
We met six or seven years ago, and we opened up for them in Minneapolis, which is in their home state. That’s how we got to know each other, and then we did Lollapalooza together. We did a secret show there and ever since then, we’ve been talking about playing together on a tour. This one was the one that held together, so it seemed like a good time to make it happen.
I’m sure this is a tricky, annoying question for any band that’s hard to categorize into a single genre, but can you tell me a little about the process and influences that go into crafting your sound?
You know, we often get called a bluegrass band, but we don’t actually play that much bluegrass. We’re really more influenced by alt blues, jug band music, jazz and early rock and roll. We don’t really do bluegrass music, although we do love bluegrass. … A bigger inspiration for us is the early fingerpicking blues stuff, Chicago blues, Willie Dixon, Little Walter, Muddy Waters. That kind of stuff, with a little bit of western swing thrown in there and gypsy swing as well.

We mix a lot of different genres in there, from country to swing to blues, but not a lot of bluegrass. We do have a banjo in the band, but with a clawhammer style that Cooper plays. So it’s not really the typical banjo-picking that you hear in bluegrass music.

But we do mix acoustic genres for sure. We don’t have a drummer but we definitely try to get people up on their feet dancing. I’d say our sound is a mixture of all the traditional American we love, and then a little bit of punk rock thrown in there. We definitely came up in the punk scene and learned a lot of what we know as a band from the DIY punk scene.
I can definitely hear that. I saw you guys perform a few years ago in Missoula, and there definitely a high-energy feel to the show.
Yeah, that’s the idea. All the early shows I remember loving were punk shows, and we try to bring that spirit to our live shows as much as humanly possible.
How about songwriting duties? How does the band handle that creative process?
I write most of the songs … [Cooper] writes a song occasionally … but usually the process is I come up with guitar and lyrics and then we get together to flesh it out with instrumentation and harmonies. We do that part of the process together, figuring out where the leads should be and if things should be tweaked a bit.
Tell me a little bit about the band name. What inspired it?
To be honest, we didn’t come up with that name. It was suggested by a friend of ours who we were living with at the time in Santa Cruz, Calif., and we were trying to figure out what our band name should be and we just couldn’t agree. No one could really come to a consensus. Then she suggested it, and we all instantly agreed on it. So that was that. That was about 12 years ago now.
You’ve got a great existing library of songs built up already, but are you working on anything new. Any chance we might hear some as-yet unrecorded material at the Festival?
I hope so. Part of the reason we’re taking a little time off right now is to get some new material up and running, both some covers and some originals. So fingers crossed, but we hope to have at least a couple new tunes for you guys when we get there.
Speaking of the Festival, have you or any of the band had chance to come out this direction before?
We’ve played in Spokane a bunch of times, but I don’t know if we’ve ever been to Sandpoint or if we’ve ever played there. We’ve definitely played in Idaho a bunch of times, but as far as North Idaho goes, I think this is our first time.
You may be interested to know that the publisher of this very newspaper, Ben Olson, includes Old Number Seven  and Shades on the short list of covers his band, Harold’s IGA, performs. Any other songs you think they should add to their catalog?
Hey man, any song he likes he’s welcome to cover! [laughs] Any song. It’s always cool to hear bands are covering our songs, so any song they like, I say go for it.
The Devil Makes Three will be performing with Trampled By Turtles at the Festival at Sandpoint on Friday, August 14. Call 265-4554 to secure your tickets.