Sandpoint local talks about the ‘Hub’ and pioneering in North Idaho

Amanda Ott serves coffee at Evans Brothers and has been serving in Sandpoint on and off the last decade, which was how I connected with her. She moved to Sandpoint at age three and graduated high school at Sandpoint High in 2007. She has found community at Evans Brothers’ coffee, describing it as the “hub.” 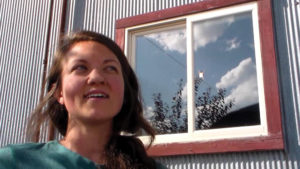 Amanda Ott, standing outside of Evans Brothers Coffee (or the “Hub” as she calls it.) Photo by Jodi Rawson.

The relationships that she has gained with her co-workers and frequent clientele bring her joy. “The people here are genuine. They are trying to pursue what is important in life and not just follow societal pressures. I really respect that. I feel like I fit in with that,” Ott said.

“One thing I love about working for Evans’ is the opportunity for education,” Ott says. She hopes to learn more about the coffee trade and perfect her Spanish speaking by traveling to South American coffee farms.

For now, Ott and her five-year boyfriend are pioneering on five and a half acres in Sagle. They paid $50,000 for their place in July 2016 and moved into a plywood shell without insulation by October.

When Ott talks about her homestead her smile lights up the hub. She loves the adventure of working towards sustainability like a “giant experiment.” It is more or less a permanent dream campsite that she has fallen in love with.

Motivated by “humanure,” Ott and her boyfriend have a composting toilet with a free truckload of sawdust from the mill. Their gray water goes to their young fruit trees. “I love the idea of not creating waste, because it should be a circular system, not a linear system,” says Ott.

Ott and her boyfriend live in a 12- by 20-foot plywood shell with plastic lining and recycled denim insulation. The fireplace keeps them “toasty warm” and they burn about three to four cords of wood a winter. “Every winter will get easier because we will be more prepared,” said Ott.

A couple of solar panels, a battery and minimal use of a generator keep their lights on and cell phones charged. A well is next on Ott’s agenda for the property, but for now she joyfully hauls water from town. Ott owns the chores as healthy exercise. Other adventures that keep her spritely are riding her bike 12 miles round trip miles to work, shredding Schweitzer with her boyfriend and hanging with her pets.

What does life look like without a well? The kitchen is a jug of water that gravity feeds into a sink (at a counter that Ott’s boyfriend built) feeding into a tub for gray water. The shower is a five- gallon solar shower bag that Ott and her boyfriend have a system for.

“We have one of those bag solar showers. We usually just heat a two-gallon kettle to boiling and add it to two gallons of cold, and I can usually eyeball it just right,” she said.

It amounts to just four gallons of water used between the two of them.

‘If it’s not windy, even if it’s like 10 degrees, as long as you have the water on you, it’s not cold,” Ott said. “It’s beautiful. A crystal-clear starry night. You have to dig out (the rock floor of the shower) because it snows in — you have this wall of snow all around you. It is really amazing! What other scenario would you experience that?”