This year’s Fourth of July parade will have not one grand marshal, but four. 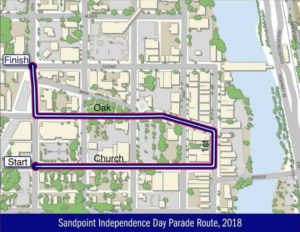 A map of the Indepence Day parade route, courtesy of Sandpoint Lions Club.

According to Sandpoint Lions spokesperson Judy Dabrowski, the organization has selected four local law enforcement officers injured in the line of duty as joint grand marshals. Sandpoint Police officers Michael Hutter and Eric Clark, who were each shot twice in a March gunfire exchange, will join Bonner County Sheriff deputies Mike Gagnon and Justin Penn, who were wounded by gunfire in January 2017, as this year’s parade grand marshals. The theme of the parade will be “the sounds of freedom.”

When selecting a grand marshal, Dabrowski said Lions members all suggest names of community residents they feel have contributed in major ways to local well-being. When one member pointed out that no less than four officers had been injured in recent incidents, the group realized that their selection was set.

“We always try to pick someone who has done something for the community, … and we all came to the conclusion that it would be a really good thing to honor (the officers) by having them be our grand marshal,” Dabrowski set.

Having four joint grand marshals instead of one isn’t the only unusual direction the Lions are taking for this year’s Independence Day celebrations. Due to ongoing construction, the parade route will start at Church Street and Fifth Avenue, turn left onto First Avenue, turn again onto Oak Street and turn once more back onto Fifth, ending at Fifth and Cedar Street.

“We can’t go down Cedar like we normally do because of the construction,” Dabrowski said.

As always, Fourth of July celebrations this year rely on raffle ticket purchases to fund the parade and fireworks show. Dabrowski encourages everyone to purchase some tickets next time they see Sandpoint Lions representatives manning booths at local grocery stores. They go a long way to making local Independence Day festivities the best they can be, Dabrowski said.

“Buy more tickets — it’s always a nail-biter as to whether we’re going to raise enough,” Dabrowski said. “This money that we raise, that’s how we pay for the Fourth of July.”