When local woman Stacy Bryan’s children started mixed martial arts several years ago, Bryan was fascinated by one facet of their training: Muay Thai kickboxing. So she took up the sport herself.

“When I started, I just became obsessed,” she said. 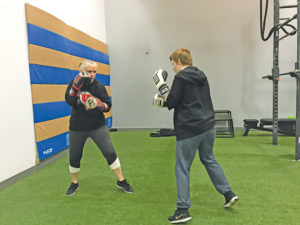 Maui Thai is a traditional form of Thai kickboxing characterized by strict discipline. Despite her obsession, Bryan said it wasn’t easy getting started. Her first teacher was very traditional, and she said she dreaded the first few classes because she found the training “intimidating.”

“But every lesson we learned something new,” she said. “It helps with self-esteem, discipline and focus. And it just feels so good when you get the combinations right.”

Now Bryan wants to do her part to bring that obsession to Sandpoint. After about a year of online correspondence, Bryan is helping bring Muay Thai trainers Daniel Docto (who goes by Khru Doc, “khru” meaning teacher) and his wife, Zina, to town this weekend to host a kickboxing seminar. The seminar is Saturday, June 16, 9 a.m.-1 p.m. at the gymnasium inside North Summit Church on North Division. Attendees will learn about “Thai history, tradition (and) Muay Thai kickboxing techniques.” The seminar is free, but donations will be accepted.

Doc and Zina are visiting from Aonang, Krabi, South Thailand to promote awareness for Thailand missions and to spread word about their training camp. Bryan met them through one of the gyms she used to train at in Utah.

Although Doc and Zina are Christian and operate under the name “Muay Thai Missions,” Bryan said they train everyone — Muslim, Christian, Buddhist and more — to become Muay Thai fighters. They also teach English and “fun” fitness in the local schools, she said.

“From what I hear, the mix of culture is beautiful,” Bryan said. “Muslim neighbors come to their church’s Christmas parties, (their) training camps climb to the top of Chinese Buddhist temples (for a workout).”

Bryan said Doc is a certified khru through a Thai university where they have a full Muay Thai curriculum. There is a big effort in Thailand to keep the sport alive, Bryan said. Muay Thai has a royal history, and is recognized as the national sport. She said everyone goes to see fights. Bryan compared kickboxing in Thailand to football in the United States.

“But it’s spiritual for them,” she said.

Bryan and her daughter Carter had hoped to visit Doc’s training camp this summer, but plans were postponed when Bryan broke her ankle. Now, with metal plates and screws holding her bones in place, the new plan is to go in December or January.

Bryan said she wants to experience Thai culture and serve through a mission, then bring her love of kickboxing to Sandpoint through a club or gym after being certified by Doc.

“We want to be a part of that community, help out and get certified,” she said. “And when we get back, I want to give lessons to people who maybe can’t normally afford it.”

Those with questions about Mauy Thai kickboxing, or who want to know more about Muay Thai Missions, can contact Bryan at [email protected]