The Idaho fishing record books better make room for the spunk and creativity of 8-year-old Sandpoint girl Sophie Egizi, who reeled in a new catch-and-release record for Gerrard rainbow trout on Lake Pend Oreille in October — a trout she named “Old Man Sparkles” before sending him back into the drink. 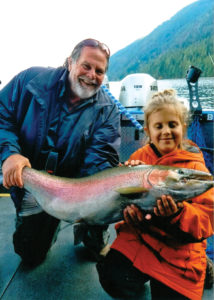 According to a Nov. 1 news release from Idaho Fish and Game announcing Egizi’s record, Gerrard rainbow trout in Idaho are unique to the Clark Fork River drainage and are listed as a separate trout species in the record books because of their trophy sizes.