A comet is an amalgam of rock and ice hurtling through space at great speeds. We often see them with a long glowing tail streaking behind them for extended periods of time. That tail is formed by escaping gasses being released as the ice warms up by getting closer to the sun (called outgassing, a byproduct of solar radiation pelting the ice molecules). It’s a beautiful sight, and to us it appears to be a tiny little streak across the sky. In actuality, a comet’s tail can reach as far as 1 AU, or the distance from the Sun to the Earth (about 93 million miles, 8 light minutes). 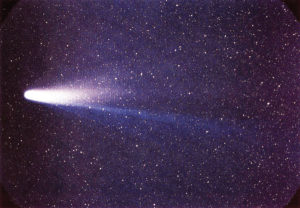 If we learn nothing else from this article, I hope that little tidbit sticks, because that’s mindblowingly awesome.

We believe most comets originate from the Kuiper belt, a band of rocky, icy objects past Neptune, though some may travel from even farther, coming from something called the Oort Cloud, which is a theoretical spherical mass of rocky, icy objects that could range in size from microscopic to planetary, stretching hundreds of thousands of AU outside of the solar system.

We’re aware of over 5,000 comets, but this isn’t even a hydrogen atom in the drop of the proverbial bucket of our solar system. There is an unknown number of objects racing through our stellar neighborhood that haven’t passed Earth in the entirety of human history.

Halley’s Comet is probably the most famous comet ever. It’s visible from Earth once every 74-79 years. It has a very long and tight orbit around the sun, coming as close as 0.6 AU, or between Mercury and Venus, before being flung out as far as Pluto. It also has a tail 100,000 kilometers long, which is huge. Each time the comet gets this close to the sun, it loses some of its mass and increases its velocity when flung around the sun. Within the next 10,000 years or so, the comet will likely break in two, evaporate, or be flung into an escape velocity and sent back into the Oort cloud or beyond. The next time we’ll see Halley’s Comet will be 2061.

Many readers my age and older will probably remember Comet Hale-Bopp, or the Great Comet of 1997. I remember sitting in my grandpa’s truck, looking up at the sky asking a bajillion stupid questions as he patiently answered and re-answered each one. It’s one of my fondest memories of childhood. I remember him telling me about Halley’s Comet in the ‘80s, and how he got to see it, and how I would get to see it when I would be his age in 2061. Given my love of bacon and nachos, I sincerely hope he was right, and I get to live that long.

Hale-Bopp was a great comet (a fancy way of saying a comet everyone can see, not just astronomers) that was visible for almost 18 months. It was also perhaps the most- viewed comet in human history, as the proliferation of widespread television made it easy for everyone, from every income to see the comet. Unfortunately, Hale-Bopp’s legacy was sort of marred by a bunch of stupid cultists, but we’re not going to go into that mess. Unfortunately for all of us, we’ll never see Hale-Bopp again in our lifetimes. Its next expected naked-eye pass of Earth is projected to be around 4300 AD. By then, I’m sure we will have all become some form of collective AI that can just fly towards it and take robot selfies or something.

So, when are we expected to see the next great comet? Your guess is as good as mine. Statistically, one passes Earth in some degree every 5 to 10 years. Whether or not they’re bright enough for us to see, or if we’re even in the right hemisphere to see them is a completely different matter.

Luckily for us, technology has evolved beyond our wildest dreams. Now, even hard-to-see comets are just a mouse click away in vivid, beautiful detail. Pixels are no substitute for the real thing, however. Lucky for us, Australia is pretty accepting of North American tourists, especially when astronomical spectacles come into play.

One of the most incredible images I’ve seen lately comes from an image of Comet Lovejoy from 2014/2015. It’s enhanced digitally, but not in that way your last four Tinder dates were.

It’s been a good long while since we’ve had a real great comet in the northern hemisphere. Keep your eyes up, and maybe you’ll be the first amateur astronomer to see something spectacular.