Firefighters in the western United States have seen a new obstacle this season: drones.

Labeled “hobby drones” by officials, the unmanned vehicles that typically carry compact video cameras have exploded in popularity among amateur filmmakers over the past two years, and are now showing up in the dangerous perimeters of wildfires. According to Forest Service officials in southern California, drones have disrupted fire suppression efforts at least four times in the last month. 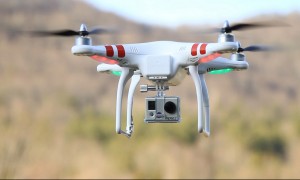 Drones like these are used by hobby flyers around fire perimeters, causing aircraft to be grounded.

“We’re really just trying to get the word out in advance: Please don’t take your drone out near a wildfire,” said Jennifer Jones, a Forest Service public affairs specialist based out of Boise.

When a wildfire occurs, a temporary flight restriction (TFR) is placed over the area, allowing fire-related air resources to operate unhindered. This is common practice that helps keep commercial airlines and media-related aircraft out of harm’s way, normally without incident. However, the new fad of camera-carrying drones presents a unique challenge and harm to firefighters: They are unpredictable and highly maneuverable, they can find their way into the flight paths of low-flying helicopters or tankers without warning and a collision with one would prove disastrous for fire air traffic. On top of all of this, a drone pilot can be miles away from the perimeter, giving officials no effective way to track them down, much less communicate with them.

“It would be so tragic if someone were out trying to get a good picture or video and ended up causing an accident that cost firefighters their lives,” Jones said.

Consequently, when drones have been spotted over wildfires, incident commanders have no choice but to ground all air traffic until the drones disappear. This has already had major consequences: On July 17, the North Fire in California made headlines as it jumped I-15 east of Los Angeles, burning over vehicles in a dramatic display that, amazingly, left no one injured. But just prior to the fire reaching the interstate, firefighters spotted up to five drones in the area. All air resources were grounded for 15 to 20 minutes, time that could have been used for at least one cycle of bucket drops. High winds and exceedingly dry brush created an extreme situation that inevitably led the North Fire towards the interstate, but every drop of retardant and water helps to slow the flames- allowing civilians to get to safety and firefighters to make progress on the ground. These drone operators stalled firefighters, putting countless civilians and first responders at even greater risk.

Firefighters battling the Lake Fire in June near Southern California’s Big Bear Lake faced a similar obstacle on June 24 when a drone interrupted air operations on the first day. After spotting a drone, a tanker carrying fire retardant was forced to jettison the load early in order to land, wasting 2,000 gallons of retardant costing an estimated $15,000. As all aircraft sat on the ground waiting for the drones to leave the airspace, gaps formed in the fire line allowing the fire to burn another 5,000 acres, costing even more time and money for firefighters.

Jones can’t confirm whether or not drones have been a problem for Idaho firefighters this season. That’s primarily because there’s no centralized data system for recording these incidents. However, she has noticed an upswing in reports of drone interference from around the country. They first came to her attention last season, but it’s only this year that the full implications of these hazards became apparent. 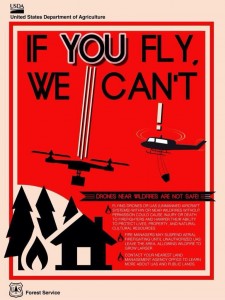 However, Jones said records show more than a dozen incidents of drones interfering with firefighting activity in the last two years across the country. Reported incidents have occurred in Washington, California, Utah, Colorado, Minnesota, Wyoming and Oregon. In Utah, for instance, firefighters experienced a near-mid air collision with a drone on July 15.

Drone pilots can be charged up to $1,000 for “interfering with firefighting efforts” or given a civil penalty for violating FAA regulations of “careless or reckless operation of an aircraft,” resulting in fines from $1,000 to $25,000. None of these laws apply specifically to drones, however, and they may not hold up in court should a case be brought against a pilot. It may also take the FAA weeks or months to investigate an incident, making it exceedingly difficult to track down a suspect.

California, for its part, is hoping to change all of this.

In late July, San Bernardino county supervisors created a $75,000 reward fund. The money will supply bounties for anyone with information leading to the conviction of the operators who interfered with firefighting efforts in that county. The vote comes ahead of proposed state legislation that would bring misdemeanor charges against pilots operating drones in restricted airspace, as well as a congressional bill that would make it a federal offense to fly drones over a wildfire on federal land (national forests and national parks).

“It can kill our firefighters in the air,” John Miller, public information officer for the U.S. Forest Service in San Bernardino County, told the press earlier this month. “They could strike one of these things, and one of our aircraft could go down, killing the firefighters in the air. This is serious to us.”