A newcomer’s guide to Sandpoint

Every summer for the past 37 years, the Festival at Sandpoint has raised its iconic white tent and drawn folks from all over the country to our little corner of paradise in North Idaho. If you’re one of the many newcomers in town for music or other reasons, here’s a quick list of activities you might check out in Sandpoint and surrounding areas. 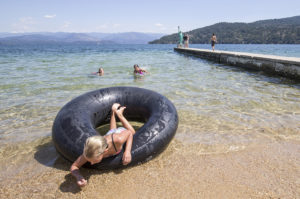 A swimmer enjoys the water at Sandpoint City Beach. Photograph by Cameron Barnes.

Looking for a healthy eating option while in town for the Festival? Check out City Beach Organics, 117 N. First Ave, in Sandpoint. Owned and operated by the Edmondsons, a family of nine, this eatery right across from Bridge St. leading to City Beach offers a variety of gluten-free, plant-based offerings. From their various melts (my favorite is the pesto melt) to fresh salads, quinoa bowls and smoothies, you can eat anything here and walk away feeling like you just did your body a favor.

For those interested in a down-home burger made the old-fashioned way, check out Serv-A-Burger, 907 N. Fifth Ave. in Sandpoint. Owned by local restaurateur Joe Mire for more than 30 years, Serv-A-Burger has become an institution in Sandpoint. Its burgers are grilled to perfection and the hand-battered onion rings are some of the best fried items available in Sandpoint. Top it off with a shake and you’re ready to hit the town.

Located a short drive across the Long Bridge, Shoga is Sandpoint’s premier sushi bar. Just take the first right after the Long Bridge and the first driveway is 41 South and Shoga — two dynamite eating options. The only thing that competes with Shoga’s expertly-crafted sushi rolls is the view of Lake Pend Oreille and the Pend Oreille River. Sit on the deck or get out of the hot sun and sit inside, where great banks of windows take in the sweep of the iconic Long Bridge and the shoreline of south Sandpoint. Either way, make sure you order a Buddha beer imported from China. Pro tip: Keep the bottle and use it as a flower vase. Food-wise, my go-to is the Godzilla Roll, but I’m a sucker for deep-fried rolls.

Your visit to Sandpoint wouldn’t be complete without bellying up at the local “Five Star Dive Bar.” The 219 Lounge, 219 N. First Ave. in Sandpoint, has established itself as a prime spot for live music in Sandpoint. During the summer months, bands play in the beer garden behind the bar. Since Sandpoint is a handy stopover between Spokane and points elsewhere, a lot of traveling acts have built Sandpoint, and the Niner, into their tours.

What better place to sit and sip crafted drinks than on a deck looking out at the lake and mountains? The bar at Trinity at City Beach, 58 Bridge St., is a favorite after-work watering hole for locals. Their Moscow Mules are divine, and the bar menu is also that perfect balance between pub fare and gourmet.

There are four breweries in Sandpoint now, but MickDuff’s was one of the forerunners. With two locations — a pub/eatery at 312 N. First Ave. and beer hall/music venue at 220 Cedar St. —  MickDuff’s has you covered for your eats and drinks. The beer hall has a courtyard outside where bands play under a strategically-located spruce tree. It’s a great place to spend the afternoon or evening under the night sky.

Located on the eastern extreme of Sandpoint, City Beach is a city park where you can take the family for a day at the beach. Swim, play volleyball, tennis or basketball, sunbathe or play on the large lawn. Just don’t ask the locals about the goose poop — sore subject.

If you’re tired of watching people float around on their lake toys and want to rent one of your own, check out Action Watersports, 100 N. First Ave. They’ll rent you anything from stand-up paddleboards to pontoon boats for the whole family. The local Holland brothers Nate and Pat run the place, located downtown off First Avenue and Pine Street. Both are accomplished athletes: Pat has competed in numerous snowboard cross competitions, including the X Games and FISA World Cup while Nate, a three-time Olympic competitor, has won eight gold medals at X Games and two World Championship medals for his downhill snowboarding prowess.

For those trying to beat their hangovers into submission, I recommend the Mickinnick hiking trail north of Sandpoint. A seven-mile out-and-back trail, this one gets a lot of use because of its close proximity to town. It’s rated as “moderate” by a lot of trail websites, but don’t be fooled by this innocent-sounding word. The trail climbs up the Schweitzer basin watershed, winding in and out of huckleberries and wildflowers along the way. You can hoof it all the way to the top, or just take it halfway to the first viewpoint. Either way, the views of Sandpoint and the lake are amazing. Dog owners, don’t leave your little bags of poop on the trail, please.

Since 1988, Farmin Park in Sandpoint has transformed twice per week during the summer months into a thriving farmers’ market. Shoppers can find a little bit of everything at the market: produce, plant starts, artisan crafts, food and drinks, jewelry, housewares and more. There’s always live music playing, usually by a local musician or band, and often a special event (like Kids’ Day on Saturday, Aug. 17, when farmers-to-be sell their wares alongside the regular vendors). If you haven’t had your fill of goods at the market, head across Oak Street and check out the food court for some tasty local cuisine. The Sandpoint Market is located at Third Avenue and Oak Street and is open from 9 a.m.–1 p.m. Saturdays and 3-5:30 p.m. Wednesdays.