Current measurements are pointing toward a typical spring runoff and refill for Lake Pend Oreille, according to the Army Corps of Engineers — information the agency will be sharing in detail during its regular spring public meeting, this year held Monday, May 11 via an online format.

USACE Senior Water Manager Jon Moen, who will virtually present to the public on Monday, told the Reader that the latest indicators — including snowpack, weather and climate forecasts — place Lake Pend Oreille at average flood risk for the 2020 season. However, nothing is certain when spring rainstorms can play a large part in runoff flows.

“There’s still a chance of unexpected spring weather, and that’s something we keep an eye on,” he said. 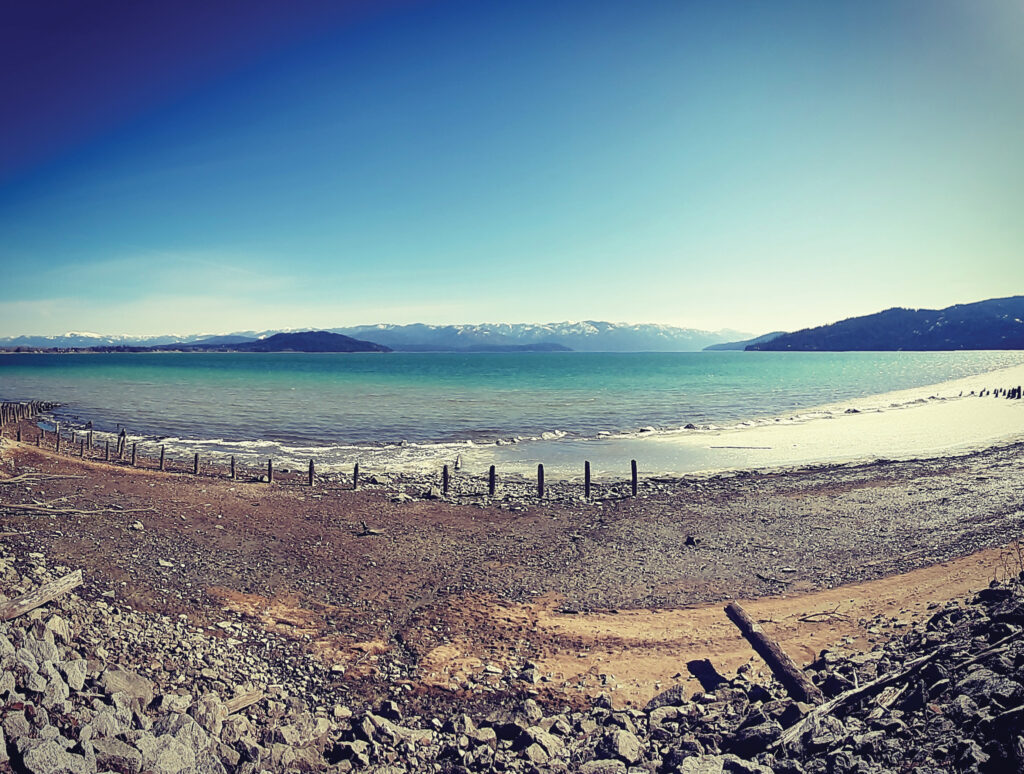 Lake Pend Oreille, as seen from under the Long Bridge. Photo by Ben Olson.

Moen said the Pend Oreille Basin’s snowpack is calculated at 109% of average, which is slightly more snow than in 2019 when the basin held 98% of the average snowpack. However, there is considerably less snow this year than in 2018, when a 153% snowpack led to severe flooding.

Also playing into the anticipated runoff is spring weather. So far, Moen said, spring precipitation and temperatures have been lower than average, meaning runoff has also been below average in March and April. However, above average runoff is anticipated in May to make up for the slow start. All current data indicate that Lake Pend Oreille will reach summer pool — 2,062 feet above sea level — around mid- to late-June, which is within the typical timeline.

“The balance of the dryness with the snowpack equals about an average runoff,” Moen said.

Right now, climate outlooks indicate higher than average temperatures and lower than average precipitation for the region through July. However, these projections are early, and Moen said it’s not uncommon for a large weather event to defy the data.

“Even a below average climate outlook for precipitation does not include the possibility of that one big thunderstorm that causes high flows,” he said.

Albeni Falls Dam Operating Project Manager Amanda Collins will also present to the public Monday regarding current operations at the dam and throughout the recreational sites across the basin. Though dam visitation facilities typically open in a couple weeks, Collins said she is still waiting for direction from “higher headquarters” as to when these facilities may open in light of the ongoing COVID-19 pandemic.

“We want to ensure to the highest extent possible that we are emphasizing safety,” she said.

Collins said her recreation staff has been active on the dam’s Facebook page and will update the public there: facebook.com/park.ranger.5686.

The Army Corps’ online meeting will take place Monday, May 11 at 6 p.m. To access the meeting, go to usace.webex.com and enter meeting number 967 524 614 and password 1234. Enter your name and email address then select “Join Meeting.” Select “Connect to Audio” and then select “Call Me.” Enter your phone number to receive a call from the conference system. The online platform will be ready for logins at 5:45 p.m.

Aside from the USACE speakers, a National Weather Service representative will also be presenting a regional weather update during the meeting.