Run, don’t walk, to check out the 45th ArtWalk

Like many artists, Dan Carpenter’s creative journey has been lifelong.

“I think I started drawing before I could write,” he told the Reader. 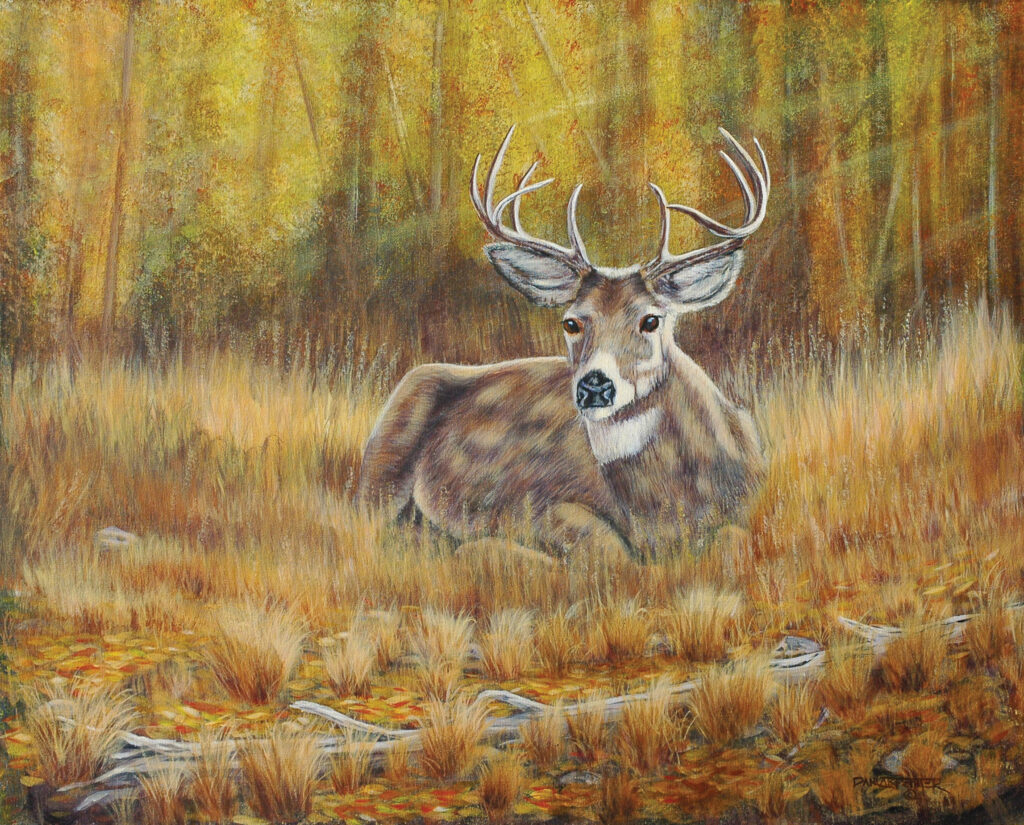 Carpenter, who is being honored as the Pend Oreille Arts Council’s 2022 Artist of the Year, has spent the past 72 years seeing where that talent might take him. At first, it was an outlet during his more introverted childhood years, growing up in an oil camp in the mountains of northwest Colorado.

“I always drew pictures of a lot of things,” he said, “and living in the country, it was a lot of wildlife.”

Carpenter’s favorite subjects remain those of the wild variety, calling his specialty “Wildlife and Western Art.” He creates landscapes and other rural, sometimes historical scenes with acrylic paint. Despite forays into architecture, photography and even forensic model creation, Carpenter’s art is now deeply rooted in the nature he enjoyed both as a little boy and now, as a resident of Bonner County.

Carpenter is one of the artists featured during this year’s ArtWalk, a summer-long event hosted by POAC, which kicks off Friday, June 17 with receptions at 28 downtown locations from 5-8 p.m. This year marks the 45th ArtWalk in Sandpoint.

“This is going to be one of the best shows we’ve ever done,” said POAC Board President Carol Deaner. “The quality of workmanship and design is extraordinary. There is undoubtedly something for everyone’s taste in art. And you don’t have to worry about getting to each venue on Friday evening, because these artists’ work will be on display until Sept. 2.”

Participants are encouraged to pick up an ArtWalk “passport” at any location, have it stamped at 10 or more participating businesses, then submit it for a chance to win two season tickets to POAC’s 2022-’23 Performing Arts Series.

Carpenter said that ArtWalk does a great job of bringing community members together who may not typically visit the downtown core.

Carpenter’s work is displayed at the Art Works Gallery on First Ave. — one of the participating ArtWalk locations — year round. He said he paints every day, and is thankful for his medium allowing him to move at a fast creative pace.

“I’m detail oriented — probably too much,” he said. “[Acrylics dry] so fast that you can keep moving. You don’t have to put it aside for a week to let it dry before you start on the next layer. I can work all day long.”

Carpenter said his paintings are often inspired by nature scenes in real life, many of which he’s been able to photograph for reference. He estimates that his studio on the north shore of Lake Pend Oreille houses somewhere around 2,000 to 3,000 images, separated into specific files depending on subject matter.

“Once the idea is there, and I have an idea of my color scheme and the size and where my light is coming from, then I can use all my references,” he said.

Sometimes, those references stroll right through Carpenter’s yard. Just the other day, he said he observed a sow and her three cubs right outside his studio window.

“I’m real lucky with all my subject matter that I have here,” he said.

Carpenter, who teaches a painting class for adults at POAC’s Joyce Dillon Studio, said that he sees art as an evolving process — one that can teach you new things even after seven decades.

“I’m trying to get looser than I’ve been for years,” he said. “I’m pretty detailed and tight on a lot of things, but I’m trying to loosen up.”

Carpenter, a seriously talented painter with an affinity for not-so-serious jokes, told the Reader that he still didn’t quite believe he’d been named POAC’s Artist of the Year, quipping that he was certain it was a “trap.”

“I think they’re goofing on me,” he said with a laugh, adding later with sincerity in his voice: “It’s pretty cool.”

See Dan Carpenter’s work at Art Works Gallery (214 N. First Ave in Sandpoint) or online at dancarpenterart.com. To learn more about ArtWalk, go to artinsandpoint.org or call the POAC office at 208-263-6139. See a complete list of Joyce Dillon Studio class offerings at artinsandpoint.org/jds-student.