Writing in pursuit of justice

Chip Crandle is restless. He’s 60, and he’s been living life on the safe track in the isolated woods of North Idaho. That is, until he is inspired to save three little girls from their horribly abusive parents.

Can murder be justified? What does it mean to “do something,” rather than to just watch the world pass us by? Is Crandle a vigilante we can all get behind? 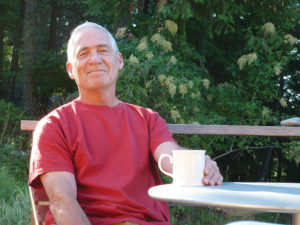 Tim Martin, author of “On Death and Flying.”

Perhaps the book’s theme is best described on the novel’s back cover: “‘On Death and Flying’ shines a light on the fears, doubts and discoveries we all experience as our parents pass, children leave, careers end and life moves on in unpredictable and often unjust ways toward the inevitable unknown.”

Essentially, Martin said “On Death and Flying” is what happens once you have 60 years of life under your belt and an endless string of stories you’re dying to tell. Martin moved to Sandpoint over a decade ago from the midwest, where he worked in advertising, communications and human resources for most of his life. While he’s always worked in writing, this is his first published novel.

“I’ve been a writer forever. I would sit at stoplights and think of openers for stories, but never write them down,” Martin said, adding he doesn’t think he could have written something the scope of “On Death and Flying” — over 300 pages in the regular print edition — until just recently. “I’m stringing together 60 years of life. Everybody’s got a cool series of events.”

Martin said the self-publishing process was fairly straightforward. He said it look about two years start to finish, with his partner as his editor. With the help of CreateSpace and a designer he found online, Martin said his book was “dolled up” and ready to distribute in a fairly short amount of time.

With a main character in his 60s, written by an author in his 60s, it begs the question: How similar are Crandle and Martin? How many of their life experiences match up? I mean really, is Martin trying to tell us he murdered some child abusers?

“You know the saying: ‘You write about what you know,’” Martin said, but went on to squash my hopes that he was actually a vigilante opening up for the first time through a “fictional” book: “It’s a book — it’s not real. This is just a dramatic example of ‘I want to do what’s right.’” That inclination — “I want to do what’s right” — is exactly what Martin hopes readers walk away with when they close the book for the last time.

“A lot of people don’t live the lives they want to, but they don’t always do it on purpose,” Martin said. “Something magic about life is when people do what they want to do.”

And that’s exactly what Chip Crandle does — what he wants. After enacting justice on the North Idaho child abusers, Crandle makes his way across the Great Plains, meeting a number of interesting (and important) characters along the way. With a plot twist that Martin said leaves readers perplexed even weeks after having set the novel down, “On Death and Flying” explores redemption in a way people of all ages will find compelling.

“This book is interesting because it starts in a dark place, and it’s hard to explain why it’s fun,” Martin said. “But it is — it’s fun.”

“On Death and Flying” is available as an eBook online, as well as in print at Vanderford’s in Sandpoint and the Well Read Moose in Coeur d’Alene.