Every New Year’s day I watch the Rose Bowl football game and become wistful. The camera always pans to the San Gabriel foothills above the stadium. When I was a kid, I’d ride the Big Red Cars — Pacific Electric trains that traversed most of southern California in the pre-freeway years — from Long Beach, where I lived, to downtown L.A. on weekends. Then I’d hoof it through bustling city streets to the interurban terminal to catch a train for neighboring Glendale. There my dad Burdette and stepmother, whose movie name was Nora Lane when she appeared with William (Hopalong Cassidy) Boyd and other celluloid cowpokes in the 1930s, would retrieve me on a corner. 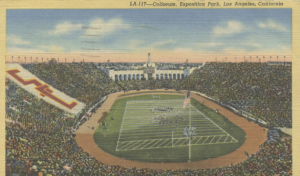 The Los Angeles Coliseum in the 1930s, where the author and his dad spent many fall afternoons. Student card stunts like the one shown here vanished in the 1950s. Courtesy Tim Henney.

Nora was my dad’s third and only happy marriage. A month to the day after he died, Nora killed herself with his six-gun, leaving a note that said, “I can’t go on without him.”

Continuing the pilgrimages to Glendale I’d made since I was a kid — except now I drove a car — I found Nora. That ghastly memory probably has something to do with my passionate belief that contrary to what Second Amendment provincials argue, only police and military should be armed today. This is not 1791. (Some 3.5 million people, including more than half a million slaves, populated the newly formed United States the year Congress ratified the Bill of Rights. Today we are about 330 million and need not depend on ill-educated gun nuts for national defense).

But back to the World War Two years. If it was fall and USC was in the Rose Bowl, my dad and I would attend the game. We saw USC beat Duke in 1939, beat Tennessee in 1940 and 1944, and lose to Alabama in 1945. With my Long Beach stepdad, Hal, a Stanford man, I saw Stanford whip Nebraska in the Rose Bowl in 1941. (But this pensive recollection is about my dad, who thought Stanford and all college football teams except USC were phonies).

On weekend visits to Glendale as a boy, I often hiked from his and Nora’s canyon home on Chevy Chase Drive into the San Gabriel Mountains, which started in the backyard. Struggling up to the crest then peering down toward Pasadena I could see that giant sanctified saucer, the Rose Bowl. The mountains were, and perhaps still are, covered with live oak, chaparral, laurel sumac and poison oak, from which I regularly suffered. Today I expect those mountains are covered with houses, maybe even strip malls and gas stations — a degradation that I, as a kid, did my best to prevent.

For example: Shift back to Long Beach, then a relatively primitive surfing town. When an apartment building was taking shape on a vacant lot across Bixby Road from my grandparents’ home in 1943 or so, my pals Bobby Busby, Bobby Watkins, Jimmy Edson (a preacher’s kid who became a judge) and I punched holes in the walls, busted windows and raised holy hell with the project. We didn’t want some dumb building to interfere with the view across the vacant lot from Bobby Busby’s house to mine.

Also, preteen boys built underground forts in vacant lots in that heady, pre-social media era in Long Beach. Vacant lots were, believe it or not, common in SoCal then and we happened to have a secret underground fort in that one.

Shift back to Chevy Chase Drive in Glendale: On a weekend visit to my dad’s, also in the early- to mid-1940s, I found wooden survey markers planted all over the pristine hills behind the house. Clearly, some developer was intent on progress. I was not. I ripped up the markers then buried them in a chaparral-concealed canyon. On a subsequent phone call to Long Beach, my dad asked if I knew of any such anti-progress activity because the police needed information. Being a quick study when under such duress, I said no. And that, as I recall, was that.

I wasn’t so fortunate after Bobby Busby, his big brother and I, frying eggs over a campfire on a vacant lot adjoining my grandparents’ house, set it and a neighbor’s fence on fire. I hid beneath my bed when fire engines — sirens screaming — came roaring down Long Beach Boulevard. I was found, grounded and got the back of a hairbrush on the butt from my mom. Today she’d be accused of child abuse. But I digress…

When I was a lad in Los Angeles before and during World War II — pre-congestion, pre-Dodger Stadium, pre-smog, pre-downtown skyscrapers and before Los Angeles had an NFL football team — I joined my dad for fall weekends at the Los Angeles Coliseum. There, as an avocation, he described colorful halftime activities over the public address system at USC games: marching bands, student “card sections,” celebrations honoring former SC coaches and players, etc. After games he sometimes took me into the locker room to meet my heroes, the players.

As a little kid during weekend visits with him in Pasadena, the Hollywood Hills, the San Fernando Valley, Glendale and other interim apartments and homes, my dad taught me how to brush my teeth (vertically, not back and forth) and to lift both toilet lids when peeing. He took me to downtown L.A. Biltmore Hotel lunches with the USC alumni club, where he’d introduce me as a future Trojan quarterback. I never quite made it.

During summer weekends he and I would go to a rustic family cabin at Lake Arrowhead in the San Bernardino Mountains. There, with blue jays squawking overhead in the evergreens, we played horseshoes, pulled up buckets of icy water from a well and zipped around then-pristine Lake Arrowhead in a friend’s wooden Chris-Craft speedboat.

Those hallowed times ended abruptly when an uncle, who lived in Pasadena and owned the Arrowhead cabin, called Long Beach one morning in 1948 to say that my dad — his brother — had died suddenly of a heart attack. My dad was 46. I was 16. I’m 88 now and almost over the shock. I feel sad yet grateful when the Rose Bowl and its familiar foothills bring him back every January 1.