Sandpoint Planning and Zoning Commission members voted 5-2 on Nov. 16 to approve a conditional use permit that would clear the way for 107 multi-family housing units on 8.5 acres of land immediately  northwest of the Sandpoint Airport runway.

The property has been in the headlines since 2019, when the Tillberg family, who previously owned it, came forward with a rezone request to a mixed-use designation. 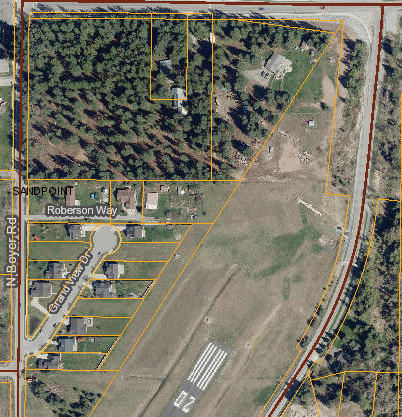 An aerial photo of the Sandpoint Airport with property lines highlighted. Courtesy city of Sandpoint.

That vote went in the Tillbergs’ favor, after what Maureen Tillberg at the time called a “nightmare” process, and the land is now owned by Coeur d’Alene-based Anton Mini Storage, which is proposing the multi-family housing development.

The live stream from City Hall malfunctioned Nov. 16, the result of power surges related to the severe windstorms that buffeted the region in recent days, so Planning and Zoning Commission Chairman Jason Welker provided the Reader with a follow-up report Nov. 17, saying that, “Ultimately the only real concern came from the airport. The neighbors kind of accepted that it was going to happen.”

He voted in favor of the conditional use permit clearing the way for consideration by the City Council, citing the need for more stock to bring down the cost of housing amid an unprecedented pricing crunch that has pinched local residents in need of a roof over their heads.

As in 2019, opponents of the rezone and subsequent development pointed to the proximity of the property to the airport, raising safety concerns as well as worries that it might imperil the airport itself — which speakers at the meeting and after underscored provides about 400 jobs and upwards of $50 million in revenue per year.

“The line that we kept hearing was the airport provides 400 jobs and tens of millions of dollars … If we jeopardize that with higher density it’s a threat to the economic strength of the community,” Welker said.

Commission member Forrest Schuck — a pilot, Realtor and whose brother, David Schuck, serves as airport manager — expressed the most robust opposition to the CUP. Reached by phone Nov. 17, Schuck said, “It’s never a good idea to have high density around an airport.”

He said the 2019 rezone of the property in question was “really stupid,” as it opened the way for high-density development within the safety areas around the airport, as well as putting in jeopardy the airport’s ability to secure grant funding.

He called the move “inappropriate zoning” and cited bodies such as the Federal Aviation Administration’s stance of “strongly oppos[ing] any residential around airports,” which among other entities shy away from giving funding to facilities that may pose an especial hazard to their surroundings.

Welker told the Reader that the cow is already out of the barn when it comes to development around the airport, and the benefits outweigh the risks: “’It’s, like, a fifth of Sandpoint is in the ‘inner critical zone,’” he said, noting that Farmin-Stidwell Elementary is within the airport’s safety zone.

That’s a fact of Sandpoint life, he suggested, underscoring that the Planning and Zoning Commission voted to include a couple of conditions on the CUP, requiring that all lease agreements in the future multi-family development include a fair use disclosure related to noise and air pollution.

“Renting an apartment there, they should expect noise, fumes, — anything that goes along with living next to an airport,” Welker said. “That’s just to provide some protection for the airport.”

Schuck told the Reader that the disclosure agreement was sound and fury amounting to very little, worrying that, “When you get a lot of people moving in around an airport it gets bad. … These complaints [about noise and pollution[ tend to turn into lawsuits,” he said.

“They’re not compatible uses,” he said of residential and airport uses.

“We do not appreciate our airport enough in Sandpoint,” Schuck said, adding that he’s all in for increased housing development, “just not here.”