Roots music for the soul

When I first sampled the Dustbowl Revival’s newest album, a single thought came to mind: These guys would be incredible live.

The album, which is self-titled, is a full-bodied and hard-hitting 11-track labor of love created by a group of Los Angeles musicians that, to put it simply, sound like the life of the party. The booming horns and vocals full of attitude and intention had me imagining the energy in any venue Dustbowl might visit. 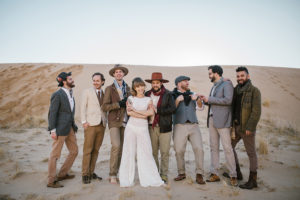 Dustbowl Revival will be playing the Panida on Oct. 13. Photo courtesy of Talley Media.

And according to the band’s front man and founder, Zach Lupetin, I was onto something.

“It’s a unique full-music sensory experience because we are a roots orchestra,” he said, explaining that as an eight-piece band, a live experience with Dustbowl is certainly unique. “We create each show. It’s a new show each time we do it because we play with the audience, not to the audience.”

That lucky audience on Oct. 13 just so happens to be at Sandpoint’s Panida Theater, Dustbowl’s off-the-beaten-path stop during their tour of California. The Pend Oreille Arts Council has partnered with Mattox Farm Productions to make the event happen. Lupetin said he has never been to Idaho personally, and Dustbowl has never graced the state with their unique sound, which is described as anywhere from American roots music to funk.

“We’ve always been a roots music group where we tie together elements of American folk and New Orleans funk, bluegrass and gospel,” he said. “We are the kind of band that focuses much more on writing great songs, telling stories and trying to move people with music. You have to let your audience decide what your genre is.”

Lupetin, who created the Dustbowl Revival with a Craigslist ad seeking like-minded music makers, said the band has been traveling the country non-stop for five years. He said part of the struggle of the modern music industry is that there are so many bands of all levels all on online and always sharing new music that sometimes it’s harder to get your stuff heard.

“Being able to share your expertise and your storytelling abilities is a gift and it’s a shame not to share that with a wider audience,” he said. “The only way to really do it, unless you write a hit song, is to get out and meet people and really blow their minds.”

The whole mind-blowing bit isn’t just talk — Dustbowl has certainly been doing something right, seeing as the LA Weekly recognized them as the “best live band in LA” in 2013.

“That was a shocker, honestly. The LA Weekly is notoriously hard to impress. LA in general is hard to impress,” he said. “You really have to stand out here. I think we were never content to play local bars and just sort of preserve folk music in some antique form. We wanted to make something new out of music we loved from the past.”

There’s something cool about getting to see LA’s best live band in little ol’ Sandpoint. Lupetin said the way Dustbowl tends to tailor their shows to the venue’s specific energy means their Oct. 13 show will be unlike any show they’ve performed before.

“(Our shows) can go in so many different directions, especially when we go to a new place,” Lupetin said. “We want to bring joy to people.”

The show starts at 7 p.m. and doors open a half hour before. Tickets are available at the POAC office, Eve’s Leaves and at the door. Adult tickets are $20, POAC supporter tickets are $15 and students can attend for $10. Missoula’s Shakewell will open the night with funk and soul, and the Dustbowl Revival will take the stage after.