Flood and fire outlook for 2019

A slightly lower-than-average snowpack is indicating that North Idaho won’t see the flooding it did last spring, according to the U.S. Army Corps of Engineers. 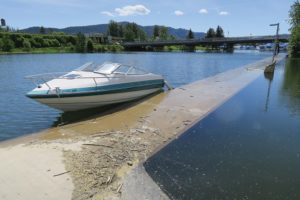 A powerboat moors at the Sand Creek Boardwalk during the flood in spring, 2018. Photo by Ben Olson.

Upper Columbia Senior Water Manager Logan Osgood-Zimmerman said the regional snowpack is about 90% of average this year, and predicted water supply from April to July is about 80% of average, meaning flood risk is far lower than last year, when the snowpack well exceeded the averages.

However, Osgood-Zimmerman noted that a lot can change within the next couple months depending on timing of run-off and possible late season storms. More data regarding those factors will be available when the USACE shares an Albeni Falls Dam operations update April 24 at the Priest River Event Center 6-7:30 p.m.

“That basin is dynamic and very active,” said USACE spokesperson Scott Lawrence. “Anything could change.”

Most can agree that no flooding is a good thing, but what could the decreased snowpack mean for fire season?

Predictive Services and the National Interagency Fire Center produce the National Significant Wildland Fire Potential Outlook each month as a “support tool for wildland fire managers, providing an assessment of current weather and fuels conditions and how these will evolve in the next four months.” The U.S. Forest Service is one agency that follows the NSWFPO closely.

This month’s outlook document, released April 1, looks all the way into July. The “Northern Rockies” region — which encompasses North Idaho, Montana and North Dakota — saw slightly below average temperatures in March, but while the snowpack continued to build in the eastern part of the region, the Idaho Panhandle tapered off, resulting in that less-than-average snowpack the USACE reports.

The NSWFPO predicts a warm April for the Panhandle, “which could lead to a faster spring snowmelt in the western areas,” but average precipitation through the spring and possibly the summer should offset any rapidly drying fuel this month.

While there are currently no cases of drought in the Northern Rockies region, the April report says, “the Idaho Panhandle and northwestern Montana continue to see dry soil moisture anomalies that have carried over from the summer of 2018 and this will need to be monitored closely.”