Released in 1982, The Grey Fox tells the story of stagecoach robber and recently released prisoner Bill Miner, played by Richard Farnsworth. A restored version of the film will screen as part of the Panida Theater’s Virtual Viewing Rooms Series. Viewers can access the film anytime Friday, May 29 through Thursday, June 11 from any home device with a $12 purchase to benefit the Panida. 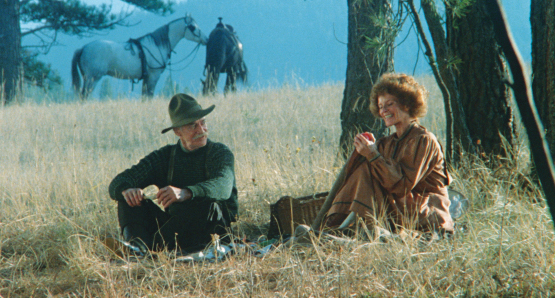 A still frame from The Grey Fox. Courtesy image.

Based on a true story, The Grey Fox chronicles the adventures of Miner upon being released from San Quentin prison in 1901. After three decades behind bars, it’s a new century and, for Miner, a new world. It’s not long before he is back to his old ways.

Miner is known to history as the first man to successfully rob a Canadian train, which happened in 1904, so there’s plenty of action in store for those who stream this classic Western film. Miner also falls in love, but will he give up his wild life of crime for romance?

The version of The Grey Fox that the Panida is streaming has been restored in 4K, giving new life to a film that critic Roger Ebert regarded as “one of the loveliest adventures of the year” when it first hit theaters, describing it as “a movie about a stubborn, indomitable character who robs people because that’s what he knows best.”

Though Ebert acknowledged that The Grey Fox portrayed the life of a true character in history, he wrote, “that doesn’t matter half as much as that Farnsworth bases his performance on how he sees the truth of Bill Miner.”

This is the final film in the Panida’s virtual series, as the theater plans to reopen in time for its Tuesday, July 7 screening  of the documentary When God Left the Building.

To access the Panida virtual screenings, go to panida.org and click the “tickets/events” button at the top of the page. Streaming costs $12 and films can be viewed anytime during the 72-hour period following payment. All proceeds benefit the Panida.

Friday, May 29-Thursday, June 11; viewing available anytime for 72 hours after payment; $12. Access the film at panida.org/event/the-grey-fox.