Roast with the most

They say you only hurt the ones you love. While that might be a cautionary statement in most instances, with a roast it’s pretty much a requirement. In that case, Jeff Nizzoli is in for it on Saturday, Nov. 16, when he’ll submit to the celebrity roast treatment courtesy of the Angels Over Sandpoint. 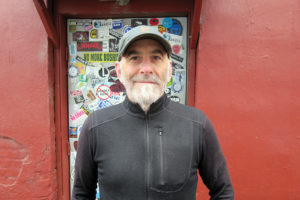 Jeff Nizzoli outside the back door of Eichardt’s Pub. Photo by Ben Olson.

Owner of Eichardt’s Pub at 212 Cedar St. in downtown Sandpoint for 25 years, Nizzoli has long been a community pillar without asking for anything in return — least of all recognition, which may make the event itself the biggest roast of all.

“Jeff Nizzoli does a lot of things that nobody really knows about,” said Sandpoint Chamber of Commerce President and CEO Kate McAlister, who as a member of the Angels board will serve as director of Nizzoli’s “Man of the Hour” roast at the Panida Theater.

“Just listening to the stories of his friends is amazing,” she said. “I found myself saying over and over again, ‘Wow, I never heard that.’ He just loves being a part of the community.”

Some examples of Nizzoli’s civic involvement include hosting the K-9 Keg Pull at the Sandpoint Winter Carnival each year; helping with the downtown flower baskets; managing the bar at The Follies every year of its 18-year run; putting together a team for the Angels’/Ivano’s Italian Open golf tournament each year; and directly donating to numerous causes, events, institutions and individuals whenever they’re in need.

Nizzoli’s giving spirit will be on display even while he’s getting the business end of his friends’ wit. While in past roasts the Angels have given a portion of ticket sales to the roastee, McAlister said Nizzoli has asked that 20% of the proceeds go to support a friend’s sister-in-law, who recently suffered a broken neck.

The two-hour event, which starts at 8 p.m., will include both touching tributes and stinging barbs, with the first half including skits, video snippets, photos and appearances by a handful of “guest bartenders” — a.k.a., patrons and friends who Nizzoli has randomly asked to watch the bar for him over the years while he runs a quick errand — telling stories about what happened “when Jeff left me in charge one time.”

“In the midst of the humor there’s going to be some really poignant stuff,” McAlister said.

Reader Publisher Ben Olson will serve as master of ceremonies, while Truck Mills — who has been a feature of Eichardt’s live music schedule since the pub opened its doors — will provide the tunes. Beer and wine will be available along with Panida concessions.

It’s possible this might be the first Nizzoli is hearing of his “Man of the Hour Roast.” McAlister said that while he’s a real mensch, “if you email him, you’ll never hear from him.” Same goes for voicemails and Facebook messages.

If so, in addition to everybody else, the Reader would like to invite Nizzoli to come on down to the Panida to honor with good-natured insults his many contributions to Sandpoint and the people who call it home.