Take tea with the Crawleys

According to the website afternoontea.co.uk — which we’re just going to assume is the authoritative source on tea time in the United Kingdom — the dress code for taking tea with others is “smart casual,” “so there is no need for men to wear a jacket and tie (unless otherwise specified).” These days that means “trousers or smart jeans, collared shirt and clean/un-scuffed shoes are acceptable.” But for god’s sake, leave your “sportswear” and “trainers” at home. 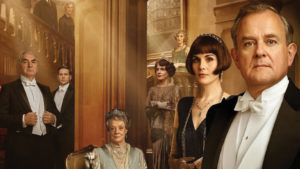 These recommendations, of course, are for the 21st century and tea times have definitely changed since the reign of King George V. Back then, from 1910-1936, you best believe men dressed in a jacket and tie for afternoon tea, and the ladies came resplendent in airy yet sophisticated tea dresses, complete with hat and gloves (the gloves came off and the hat stayed on until 6 p.m., just so you know). Regardless, lighter tones only, please — black was reserved for the evening hours.

Bear all this in mind and dress accordingly if and when you accept a cordial invitation to afternoon tea and a viewing of Downton Abbey, the feature-length film, which comes to the Panida Theater for two showings Saturday, Nov. 16 at noon and Sunday, Nov. 17 at 3:30 p.m.

The costume drama, set in the palatial country home of the Crawley family in a fictional Yorkshire, takes place in 1927 — and about two years after the aristocratic action that ended the smash-hit, six-season PBS series of the same name. (And, coincidentally, the same year the Panida was built.)

Fans of the show will recognize much in the two-hour, big-screen version. All the major characters are back, from Lord and Lady Grantham to Mrs. Patmore and Daisy, Lady Mary, Thomas Barrow, Mr. Carson and Tom Branson. Of course, the real star of the show is and always has been Violet, the Dowager Countess, played by the ever-phenomenal Maggie Smith.

There’s a lot of silverware polishing, run-of-the-mill estate management and food preparation, spiced as is its wont, with subtle burns and low-flying subversions of decorum and protocol. The stakes are higher than ever, though, as the upstairs and downstairs denizens of Downton Abbey prepare for a visit from none other than His and Her Royal Majesties, King George and Queen Mary.

Reviews of the film have been positive across the board, with critics praising its lavish attention to period detail in set and costume design, its crackling writing and the sheer pleasure of reuniting with favorite characters from the TV series, which ended in 2016.

The consistent caveat, however, is that this is a film intended for the initiated. If you were a fan of Downton on the small screen, you’ll be a fan of it on the big screen. If not, you may ask yourself what’s all the fuss about these fussy Brits. That said, if you’re a lover of clever dialogue and picture-perfect scene setting, there’s nothing not to like — whether or not this is your first visit with the Crawleys and their help.

Regardless, remember to keep your pinkie in and only stir from bottom to top in your cup.