Farmers’ Market fans fed up by anti-abortion protesters are seeking the city’s help to remove them.

Although it wasn’t on the council agenda, about a half-dozen concerned citizens utilized the public forum portion of Wednesday’s City Council meeting to see whether they had any recourse against the protesters. They said their behavior has hurt business, frightened children and ruined a beloved local institution. 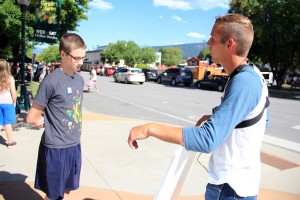 Chris Hutto, right, preaches to a Sandpoint youth at the Farmers’ Market in Sandpoint. Photo by Ben Olson.

“I had customers contact me later saying they were not going to return to the market,” said Diane Green. “It was their belief the market supported and allowed what was going on.”

According to market president Kelsey Racicot, the self-proclaimed abortion abolitionists have previously targeted the Saturday market before, waving graphic signs to convey their message. Over the past few weeks, however, they’ve resorted to increasingly aggressive tactics, using microphones to drown out other noises. The upshot is dwindling attendance and poor sales.

“Now that they can amplify their message, it’s really hurting business,” Racicot said. “Customers are leaving, vendors can’t communicate with their customers. They can’t conduct business. Members are coming to us over and over again expressing that they are dissatisfied.”

The residents were particularly concerned about the effect the protesters were having on their children. They said the market was previously a place where kids could run around and play with one another, but now, they were being targeted by protesters and told they were going to hell. Nathan Wood said his young son thought they were going to kill him since they were holding signs of bloody bodies. Jennifer Wood, meanwhile, said that when one market attendee got into a fight with a protesters, an small child was knocked into a booth and injured.

“This is how ugly it has gotten,” Wood said. “This is domestic terrorism.”

According to Mayor Shelby Rognstad, the city is aware of the problem and is working on a solution. While the city must respect the First Amendment rights of the protesters, they hope to find a solution that will protect the Farmers’ Market experience for everyone else. One option is to alter the city’s amplification ordinance, which allows noise levels to a maximum of 70 decibels. Other possible ordinances to enforce include prohibitions against blocking the sidewalk and aggressive panhandling.

“The issue is that what they’re doing versus what we have on the books is on the edge but, I think, still allowable,” said Scot Campbell, Sandpoint city attorney.

“The things that they’re doing like [aggressively following people and using microphones] can be stopped, and that’s something we can do,” he added.

Police Chief Corey Coon also said he would do what he could to funnel more police attention to the Saturday market. He reminded residents that if a police officer doesn’t witness an infraction taking place, they need a witness who did. He encouraged Farmers’ Market attendees to report any violations of the law they notice.

“If we come down or if [police] get called, we just need someone to say, ‘Hey, I want to sign a citation for aggressive panhandling or for following my kid or forcing stuff on me,’” Coon said.