Dancing, singing, high-stakes competition, the chance at a new beginning: It’s all a day in the life of Cats, the long-running Broadway production, which is about to take the world by storm again — this time as a blockbuster film. 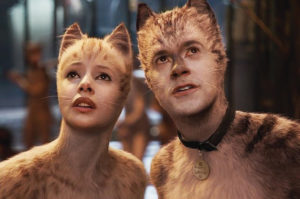 A still frame from Cats, playing at the Panida Theater. Courtesy photo.

Director Tom Hooper — known for his work on The King’s Speech, Les Misérables and The Danish Girl — brings the play to the big screen in the biggest way, securing a star-studded cast and the newest CGI technology to bring new life to a well-loved narrative chock full of song and dance.

While the first Cats trailer released earlier this year relied on the viewer to either know the original Broadway show and be swept away in nostalgia, or be so enthralled with the theatrics of it all to become invested, the second trailer went further into explaining what, exactly, is happening in Cats.

As far as plots go, Cats is fairly straightforward: All of the felines are vying for a place in the Heaviside Layer — heaven, but for cats. Old Deuteronomy is the group’s matriarch, and therefore gets to make the selection.

It’s all based on T.S. Eliot’s 1939 book Old Possum’s Book of Practical Cats — a collection of poems based on the lives of the whimsically-named felines that would ultimately serve as the basis for Andrew Lloyd Webber’s musical, which first saw the limelight in the early 1980s.

“Memory” is the song most audience members remember from the production, whether they’ve seen it or not. Betty Buckley brought down the house at the 1983 Tony Awards with her performance of the tune, and a YouTube viewing of that moment will make the hair on anyone’s neck stand up — the lyrics “touch me / it’s so easy to leave me” are burned into Broadway history forever.

Buckley took home the award for Best Featured Actress in a Musical for her work as Grizabella. Lucky for us, Hudson belts the iconic ballad in a way only Hudson can in the movie’s trailer, promising that “Memory” won’t disappoint in its silver screen reincarnation.

All in all, Cats will likely receive mixed reviews. Maybe it’s the prospect of vague nudity and state-of-the-art CGI fur that has people nervous. Still, the casting and sheer glamor promised by the trailers will surely capture audiences.