American Indian Tribes across the West are grappling with the dilemma of how to balance development of energy resources on their ancestral lands with the traditional beliefs of caring for and respecting the gifts of Mother Earth. Tribes along the Washington coast, including the Lummi Nation and the Swinomish Indian Tribal Community, have effectively blocked proposed fossil fuel projects to protect their treaty rights. 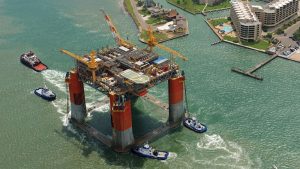 Red Willow Production Co., an affiliate of the Southern Ute Indian Tribe, ventured offshore in 2003 via an exploration agreement with Houston Energy and W.G. Helps in the Gulf of Mexico. Courtesy photo.

But the Standing Rock Sioux of North Dakota is having a harder time. Their legal efforts to protect ancestral lands and its waters from the potential impacts of an oil pipeline under construction—the Dakota Access Pipeline—that would take Bakken oil from North Dakota, cross the Missouri River just upstream of their 2.3-million-acre reservation, pass through South Dakota, Iowa and Illinois and potentially impact their source of drinking water, and threaten burial grounds and traditional sacred sites have been unsuccessful. Nevertheless the issue and this single fossil fuels project has galvanized thousands of Indians from 150 tribes to gather along the Cannonball River to join the Standing Rock Sioux in peaceful and prayerful resistance. The gathering has become a literal symbol of the modern struggle in Indian Country of tradition versus progress and a microcosm of today’s controversial energy and climate change debate.

It is with this struggle in mind that The Idaho Mythweaver and Wild Idaho Rising Tide will be publicly screening “Red Power Energy”, a new documentary film by Vision Maker Media and Rocky Mountain PBS, at the Panida Little Theater at 7:00 p.m. on Thursday, Oct.27. The event will also serve as a fundraiser to support the Standing Rock Sioux’s Legal Defense Fund with a suggested donation of $5 as theater admission.

Immediately following the one-hour film, members of the Kalispel Tribe of Indians will speak about their time at the Standing Rock gathering including their time on the Missouri River from Bismarck, N. D., in a traditional dugout canoe as part of the multi-tribal canoe paddle to its confluence with the Cannonball River.

Provocative, timely and unique, the documentary offers rare insights into the ideological battle shaping modern Indian Country. The question of how to develop energy resources has created conflicts for tribes between tradition and progress, and between the material needs of today and the potentially negative consequences for future generations. Told solely from the Native American perspective, with nearly an all-Native film crew and advisory council, the film features American Indian tribes from North Dakota, South Dakota, Montana, Wyoming and Colorado.

“Red Power Energy” offers a rare glimpse into Indian Country while advancing a deeper understanding of the energy debate.