Mysteries of the Deep: Part 3

Her speech well rehearsed, she had just settled into a light doze when a touch of turbulence brought her back to attention. She glanced out the window and down through thousands of feet of clear sky, where a large, sinuous curve of shining water caught her eye.

“How long until we reach Seattle?” she asked a crew member.

“Still about another hour, Mrs. Roosevelt.”

A lake that big and so far from the coast? The mountains ringing it looked steep, too. It must be deep. She jotted down a reminder to mention it to her husband, the 32nd president of the United States, Franklin D. Roosevelt. 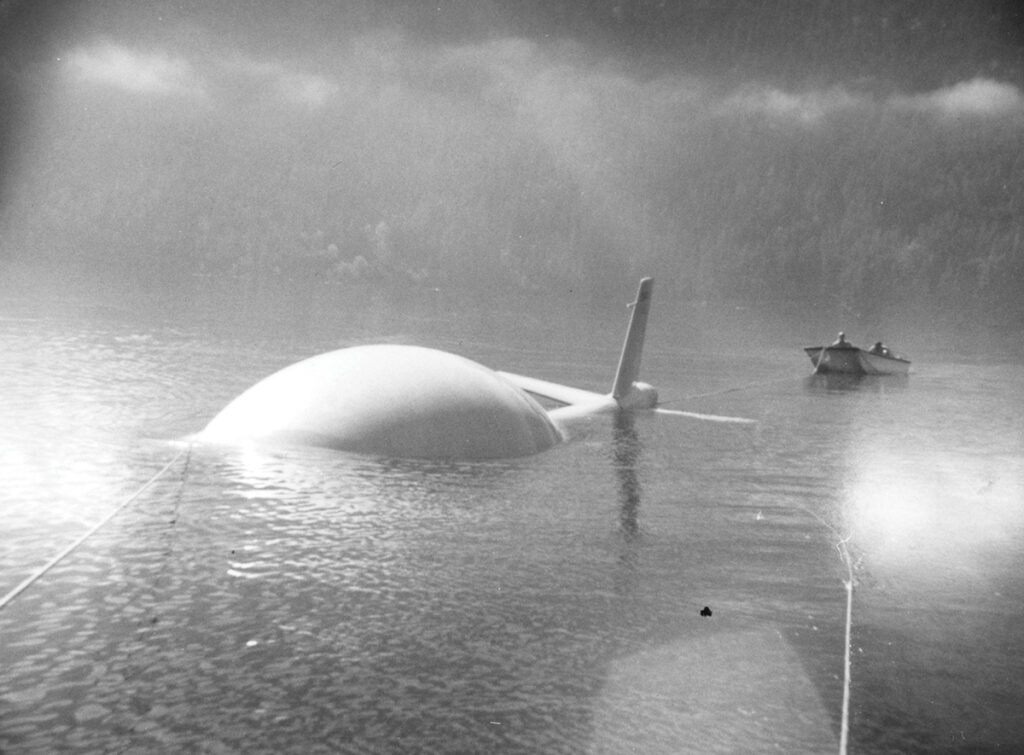 A model submarine at Bayview in the late 1960s. Photo courtesy of the Bonner County History Museum.

Idaho’s version of Area 51 started out as the Farragut Naval Training Center, once the second-largest base in the world and now a 4,000-acre state park. The idea of training sailors 375 miles away from the ocean seemed preposterous to the public in 1942, but creating an under-the-radar Navy submarine research center was a strategic military decision, brought to the attention of President Roosevelt by his wife, Eleanor.

The first lady knew her husband’s desire to train sailors far from the prying eyes and bombers of the Axis powers. The attack on Pearl Harbor in 1941 created a need for speed in developing training facilities throughout the nation. By March 1942, FDR made a secret visit to the site with the governor of Idaho, and the presence of two railroads (Northern Pacific and Spokane International) along with a newly built US 95 sealed the deal.

But what about submarines? Perhaps the rumors started because of the 900 German prisoners of war who came to Farragut in late 1944. Because recruits were sequestered in their own camp, with strict adherence to secrecy, it is difficult to verify any submarine training that may have happened in the ’40s. Trained in secrecy — even at the Farragut reunion in 1985 — no sailor came forward with verifiable stories of German Kriegsmarine veterans helping train American submariners.

The Navy maintained a research base over the years at the water’s edge of the Farragut facility. The deep water and the consistent cold temperatures became a perfect laboratory for acoustic research and sonar development. Because of the top secret nature of the work, much of the testing happened under the cloak of darkness and after the summer recreation season. There is little doubt that the Navy used the “monster of the deep” as a diversion for their experiments with acoustic properties of ships, submarines, and torpedoes. Leaks about something big identified in the deepest parts of the lake helped to deflect and obscure the real mission at Bayview.

Military researchers’ advances in sonar detection at Bayview helped solve a major problem for the Navy during World War II. The original sonar would go out and bounce back off of fish. As such, sonar operators would hear fish “talking” and other unwanted noise. The researchers at Farragut developed a way to filter out any organic sounds — a major breakthrough at the time. They played a significant role in the “run silent, run deep” post-war program.

As service members at Bayview began to embrace their new Idaho home, they named some of the experimental ships — called “large scale vehicles” — after local fish. An early notable test vehicle, christened the Kamloops, arrived in 1967 from a shipyard in California. The 70-foot, 3.5-ton vehicle tested wake signatures, new sail designs, propeller noise, new propulsion concepts and active handling capabilities. The 90-foot LSV-I “Kokanee” became the next arrival to Bayview, serving as a precursor to the Seawolf class of Navy submarines. Its testing helped finesse design characteristics like flow, structural strength, vibration and underwater acoustics. All of the research submersibles were 1/4 scale models of the eventual full-sized submarines and ships. Cost effective, for sure, and easier to operate undetected on the lake. The Navy has always maintained that the vessels were unmanned.

At $3 billion dollars for the full-scale version, the Bayview testing vehicles were economical and helped birth an “exceptionally quiet, fast, well-armed submarine, well-equipped with advanced sensors.” A full-scale Seawolf is 343 feet long.

Another LSV, christened the “Cutthroat” by Athol Elementary School students, helped launch the Virginia class of fast attack submarines. At 110 feet long, it was the largest unmanned submarine at its time. The Navy designed it to be modular so that various parts of its hull could be switched in and out for various testing purposes with relative ease. Where the Kokanee’s propulsion put out 3,000 horsepower, the Cutthroat sped along with 6,000 horsepower.

The Kamloops, Kokanee and Cutthroat may have been part of an inventory of up to 10 vehicles at one time, but it is hard to be sure. Although the Navy became less secretive over the years, it has still held much close to the vest.

With a growing North Idaho population, it became harder for the Navy to bring in experimental equipment overland to launch at Bayview. News photos showed one transported submarine stuck along the highway — an unwelcome headline for the Navy. The Kokanee arrived by rail to Dover Bay, shrouded in secrecy. The Navy built a temporary shipyard at Dover as an easier way to deliver the experimental vehicles. They used the existing railroad spur from the Union Pacific main line from the lumber mill days, and the present Dover boat launch is courtesy of the Navy.

The small base supported every major submarine and sonar design for almost 70 years. The clear water, steep shores, flat muddy bottom and constant chilly water temperatures below 100 feet made for great test conditions. The Navy knew they had an accidental gem, and eventually developed the Acoustic Research Detachment at Bayview/Farragut.

In 2005 ARD Bayview received its first 1/4 scale model surface vessel to operate and test. Nicknamed Sea Jet, it was the precursor to the Zumwalt Class Destroyer, with a unique, radical hull design. Its most notable feature was a shrouded and totally submerged impeller drive design. This rudderless concept built by Rolls Royce could achieve speeds of 18 knots, and the hull design produced a much smaller wake. Its strange design rekindled stories of the fabled lake monster, the Pend Oreille Paddler.

Maybe more of the story of the Navy’s landlocked base will come to light in the future. Retired Admiral Edmund Giambastiani, head of the Navy’s submarine warfare group at one time, called Lake Pend Oreille “the U.S. Submarine force’s most important body of water.” Of course, we beachgoers like it for other reasons.