After a year-long hiatus, the Reader Reels film series is back with a movie at once hilarious, heartfelt and tragic.

Building up strong Oscar buzz right in time for awards season, “Three Billboards Outside Ebbing, Missouri” stars Frances McDormand at the top of her game as a grieving mother who hasn’t received justice for her murdered daughter. Frustrated by law enforcement inaction, she places three billboards outside town accusing the sheriff, played by Woody Harrelson, of failing in his duties. The chaos that spirals from those billboards must be seen to be believed. 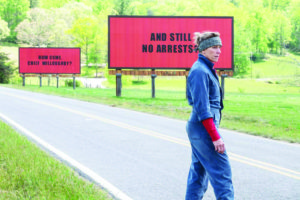 Those who have seen writer-director Martin McDonagh’s first films, “In Bruges” and “Seven Psychopaths,” know his films aren’t for delicate sensibilities. “Three Billboards” is rated R for violence, language throughout and sexual references. Those up content, however, will find an entirely unique cinematic voice.