The city of Sandpoint, along with Colorado-based open spaces consultants GreenPlay and landscape architectural firm Bernardo Wills Architects, hosted a full-day open house and public input session Aug. 14, gathering feedback on a range of potential projects and priorities as part of its Parks and Recreation Master Plan. 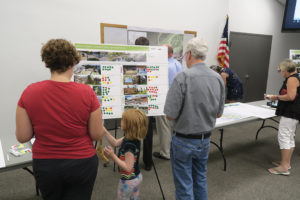 Five sites were the focus of the open house, which took place from at City Hall, and public gathering that night at The Hive: the Sandpoint watershed, Travers Park/Great Northern Sports Complex, War Memorial Field, downtown waterfront and City Beach.

Attendees were invited to view information boards featuring a range of possible changes to the various properties, then affix color-coded stickers to each signifying their approval, disapproval or ambivalence. Blank boards were also made available for residents to write-in and vote on their own suggestions. Finally, planners presented each site alongside a “mini-poll” listing four broad usage concepts and asking respondents to rank each on a scale of high to low priority.

“All we’re doing on these dot boards is ask, ‘What do you think?’” said Dell Hatch, principal with Spokane-based Bernardo Wills. “It’s an information gathering effort specifically on these options; basically to get the pulse of the community.”

“All of these parks are pretty different and have different influences on them,” said Hatch, whose firm visited Sandpoint — coincidentally, his hometown — at the beginning of the month to tour each site.

“To try and tie a consistent theme through any of them is challenging,” he said, though added that one commonality for is, “none of them have had from their inception a concrete plan.”

Rather, he said, construction and maintenance have been piecemeal, evolving over time.

The purpose of the site-specific planning is “to bring some consistency to how today’s improvements can be followed tomorrow,” Hatch said. “This way, you can do cost estimates and budgeting. You at least have a snapshot of what these improvements cost and it allows [the city] to plan how not only to build but, more importantly, afford to maintain them.”

According to Sandpoint City Administrator Jennifer Stapleton, considering how changes at one park might affect another is critical to the master planning effort.

For instance, she said, taking into consideration the expansion and improvement of athletics facilities at Travers Park might have bearing on what changes are needed — or wanted — at Memorial Field. Another example Stapleton pointed to was thinking about the Sand Creek downtown waterfront site in the context of City Beach. Pedestrian and bicycle connectivity, parking and water access at both sites feed into one another.

“Looking at this through an economic lens … there’s a direct line between these activities and economic vitality,” she said.

That said, Stapleton emphasized that “this isn’t the city coming up with these plans. We’re gathering these ideas and asking the public to look at them, give us your feedback. We’re looking for reaction.”

Hatch said that planning consultants will take the input gathered Aug. 14 back to their respective offices and return to Sandpoint in late-September or early-October for another round of outreach. Consultants will then return in December with a final representation of the public feedback, which will be considered by the Sandpoint City Council.

The plan is scheduled to be finalized by the end of March 2020, but “we feel pretty confident we can accomplish it by then or earlier, Stapleton said.

In the meantime, an online survey on the Parks Plan options will remain open until Friday, Aug. 16. Find it at bit.ly/2YLAvtD.