Profiles of Graduates: First generation student Jessica Inman aspires to make a difference in the classroom

Recent Lake Pend Oreille High graduate Jessica Inman stumbled upon her dream career as she worked on her senior project this year. 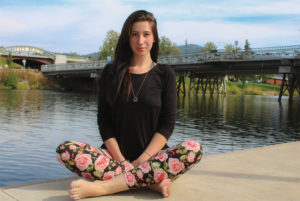 “At first when I did my report on teaching it was kind of a joke, something a teacher suggested and I just went with,” she said. “But then I adored the time I spent in the classroom during my job shadows at Farmin Stidwell. I had so much fun.”

Inman will be starting at North Idaho College this month, in hopes of eventually becoming a third-grade teacher.

“I think it’s a really great place to get used to college. I didn’t want to walk into a university and act like I know what I’m doing, so I decided to go with something a bit smaller since I came from a really small school,” she said.

Being first generation, this fall will be especially momentous for Inman and her family.

“I always wanted to go to college because no one else in my family has done it, so I wanted to choose a different path than them,” she said. “It’s a lot of stress because my whole family is so proud of me, so I’m more afraid to fail than usual. It’s a little bit more scary because if I fail, I’ll be letting a lot of people down, but my plan is not to fail.”

Inman said she was in complete shock when she found out how much Lake Pend Oreille High School had given her in scholarships.

“When I got my scholarships from LPO, my mom came, and just to see the excitement on her face when she saw how many I got, she went crazy, I’d never seen my mom like that before. That feeling was amazing, and I just want to make my family proud,” she said. “I’m not coming from a family with a lot of money, so what they did for me is just life-changing. It gives me goosebumps to talk about.”

LPOHS’s life-changing impact on Inman’s life began long before she earned her scholarships: years prior, it helped to redefine her relationship with education.

“I don’t even know where to begin. I didn’t even last a quarter at Sandpoint High. I had really, really bad anxiety and depression, and so I hated school. All throughout middle and high school, I skipped every chance I would get. When I got to LPO, I felt like I was a part of something. They made me feel involved, and they just made me feel like I was there for a reason,” Inman said.

“These last four years have been very, very rough for me, and they’ve helped me through everything.”

Inman hopes to bring it full circle by eventually being there to help students struggling like she did.

“If I have students like that in my classroom like (me), I want to slow down and take time with them,” she said. “I want to make school a place where kids can like to be, kids that were like me growing up, the outsiders and the weird kids. I want to make a safe place for those kinds of kids.”

Inman aspires to teach in Washington, in urban areas to connect with at-risk students.

“My biggest excitement is expanding my education further, because I really like knowing stuff and expanding my mind,” she said. “The support that I got from LPO and the help that I needed to get really changed my outlook on learning.”