The Bottle Bay Road project, which has had the intersection with Highway 95 blocked off all summer, is entering its final stages, according to Bonner County Road and Bridge Director Steve Klatt. 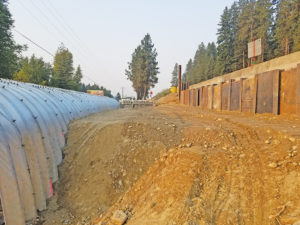 A few from outside the bicycle culvert at Bottle Bay Road. Courtesy photo.

Backfill over the newly placed bike path culvert beneath the road should be completed by the end of next week, Klatt said, and the project should be done and road open by Sept. 15.

“The project was slow to get started, but once it got started it has moved along as scheduled, and will actually be done two weeks ahead of schedule,” Klatt said.

The Bayview Road paving project is currently underway, causing some delays but no closures. That project is also slated for completion mid-September, Klatt said.

Evergreen Road between Colburn Culver and Samuels Roads will be closed at the 1200 block from Monday, Aug. 27 at 7 a.m. through Wednesday, Aug. 29 at 4 p.m. The county reports that signs will be posted in the area in advance.