Priest River Elementary students had an assembly day last Friday that encouraged them to shoot for the stars — or at least planetary orbit. 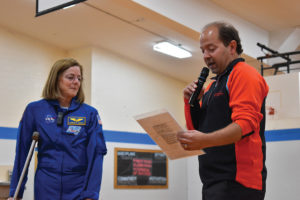 Teacher and former astronaut Barbara Morgan, the guest of honor at the event, knows a thing or two about that. In her presentation to students at a school assembly, she shared video, pictures and stories of her 2007 mission to the International Space Station. It was the fulfillment of a longtime goal for Priest River Elementary School Teacher Chris Naccarato, who started the National Astronauts in the Classroom Association to inspire young minds.

“Sometimes you choose a goal in life, and sometimes it chooses you,” Naccarato told students, using his NACA experiences as an object lesson for pursuing a goal through persistence and hard work.

Between the assembly and an outdoor extravaganza firing off model rockets afterward, the annual Space Day was a lively affair for Priest River students. Naccarato teamed up with his crew of students to fire off rockets of all shapes and sizes, including the Western White Pine, a javelin-shaped missile taller than a person. Underlining all the activities was the message that science and mathematics can open up a new horizon of exciting opportunities and careers for local students. 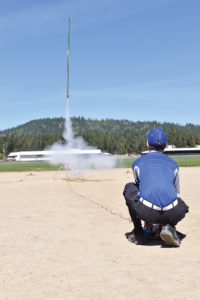 There’s no better example of that then Morgan, who described her experiences in space from takeoff to the return flight. While on the International Space Station, Morgan operated a robotic arm to transfer thousands of pounds of cargo onto the low-Earth-orbit station. She told students that due to the lack of gravity, almost everything is different. Some things are easier, like the ability for a single person to move weightless containers that would add up to thousands of pounds on Earth. But other tasks are more difficult, and that includes simply docking with the space station itself as it orbits the earth at 17,150 miles per hour. Morgan likened it to driving down the highway at max speed and attempting to shake hands with the driver in the next lane.

For all the challenges, Morgan’s mission to the International Space Station was the fulfillment of her life’s greatest dream, one that reaches back decades. In 1985, she was selected as a backup candidate for the Teachers In Space Project and trained with the crew of the Challenger space shuttle, who tragically died when the spacecraft broke apart in its 1986 flight. The disaster wasn’t enough to squash Morgan’s own dreams of space, and more than 20 years later, her opportunity finally arrived.

Morgan’s visit was an honor not just for the students and Naccarato, but also for Priest River itself. City Mayor Jim Martin attended the assembly to declare May 10 “Barbara Morgan Day” and read the formal proclamation for the occasion.