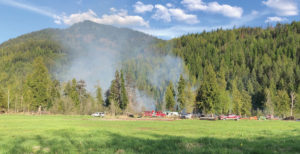 Bonner County Emergency Management reports that dispatch received word of “a controlled burn that got out of control” around 3:25 p.m. Saturday. Clark Fork Fire, Clark Fork Ambulance and Sam Owen Fire responded, and the agencies called on Northside Fire and the Idaho Department of Lands for assistance just after 5 p.m.

A Nixle alert sent out at 5:24 p.m. read “Advisory only: Fire units are on an active small wildfire in the Mosquito Creek Rd area. No need for action at this time.”

A Bonner County Emergency Management notice, released at 7:41 p.m. via Facebook, let the public know that IDL personnel were reporting that they’d contained the fire to a “boggy” area and intended to stick around until the blaze was fully extinguished.

Though the temperatures reached into the 80s across much of the Pacific Northwest over the weekend and increased fire danger at a rapid pace, the National Weather Service forecasts cooler weather and “well-needed rains coming this week,” according to the agency.