An authentic suit of armor.

For the second year, the Faire takes place Saturday and Sunday, Sept. 1-2 at 784 Shingle Mill Rd. at the Rockin’ O Ranch from 10 a.m. to 6 p.m. both days. Admission is $10 for adults and $5 for children aged 5 to 17. Children under 4 attend free. Bring a bag of canned goods to donate to the Bonner County Food Bank and get a $2 discount off the ticket price.

Organizer and member of the Sandpoint Renaissance Fair Association Tonya Anderson said this year’s Faire comes on the heels of a successful inaugural event last year.

“Last year was our first year, and we had a really good turnout,” Anderson said. “It was so fun – a lot bigger than we expected. We had one family out here from Vermont, another from Alaska just to come to the Faire.”

The Renaissance Faire will feature a wide variety of Elizabethan-style events and entertainment, including loads of live music, artistry, food and crafts vendors, two jousting performances each day at 11 a.m and 5 p.m., belly dancing, boffering demonstrations open to the crowd, turkey drumsticks, an ale house operated by local Vietnam veterans pouring Kootenai River Brewing Co. beer complete with “wenches” to serve your ale or wine and much more. There will even be a man with a pet hawk.

Anderson said the Faire was founded after getting inspiration from attending the Sandemonium fandom convention a couple years ago. 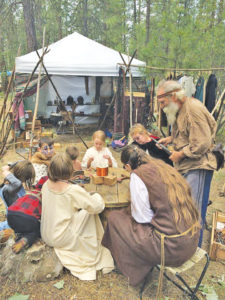 There’s always something for the little ones to do at the Faire. Courtesy photo.

“Our president went to last year’s Sandemonium and was just impressed with the turnout and the fantasy stuff,” Anderson said. “A couple of us that are history buffs love the Tudor era, so she called me on the way home from Sandemonium and said, ‘Why doesn’t Sandpoint have a renaissance faire?’ That’s how we started.”

The two-day event is fun for all ages, with an arts and crafts area where kids can make crowns and shields to decorate, and a fairy realm children’s area to explore.

“We have a lot of things to keep the kids entertained,” said Anderson. “Parents can shop and see the local merchants and enjoy the food. Our whole thing is the sights, smells and sounds. We want to encompass all that into one great festivity for merriment.”

Anderson said she’s always been drawn to this culture, and that the faire is a great place to immerse yourself in fantasy with the acceptance of those in attendance.

“For me, playing Elizabeth – I am her and she is me,” Anderson said. “It’s something that’s unexplainable. I just love the poetry and romanticism of the time. The royalty, the castles, the whole ambiance of it all. There is a lust for that fantasy and life out there, and it’s nice to have a celebration to get together and enjoy that.”

A big part of the Faire is the assortment of live music throughout the weekend. Rebel Times, a Medieval style band, will captivate the crowd with their unique brand of Celtic, period music. The Back Porch Fiddlers will also play, as well as Fiddlin’ Red and Desiree Aguirre and Margie Cook from the Music Conservatory of Sandpoint. 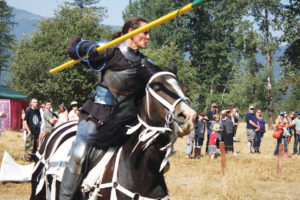 Anderson said any businesses that wish to sponsor or donate to the association will enjoy tax deductible status because they are a nonprofit organization. Also, the Faire will be collecting canned goods to donate to the Food Bank.

“Last year we raised over 300 pounds for the Food Bank and we’re hoping to beat that goal this year,” Anderson said.

While many show up dressed in costume, the Faire is open for anyone and everyone, costume or not.

“We have a fair amount of people that show up dressed in costume,” she said. “Any attire, whether royal or celtic or otherwise is fine. Even if you’re one of Mary Queen of Scot’s fans, you’re still welcome to the Faire.”