Like most people who can vaguely be categorized as millennials, I did a double-take when I saw the poster advertising When We Were Young Festival — a music event slated for Las Vegas in October.

The power-packed lineup could immediately be labeled as Too Good To Be True. My Chemical Romance. Paramore. Bring Me The Horizon. Bright Eyes. A Day To Remember. Taking Back Sunday. The Used. A pop-punk decoupage plucked straight from an emo kid’s fever dream. 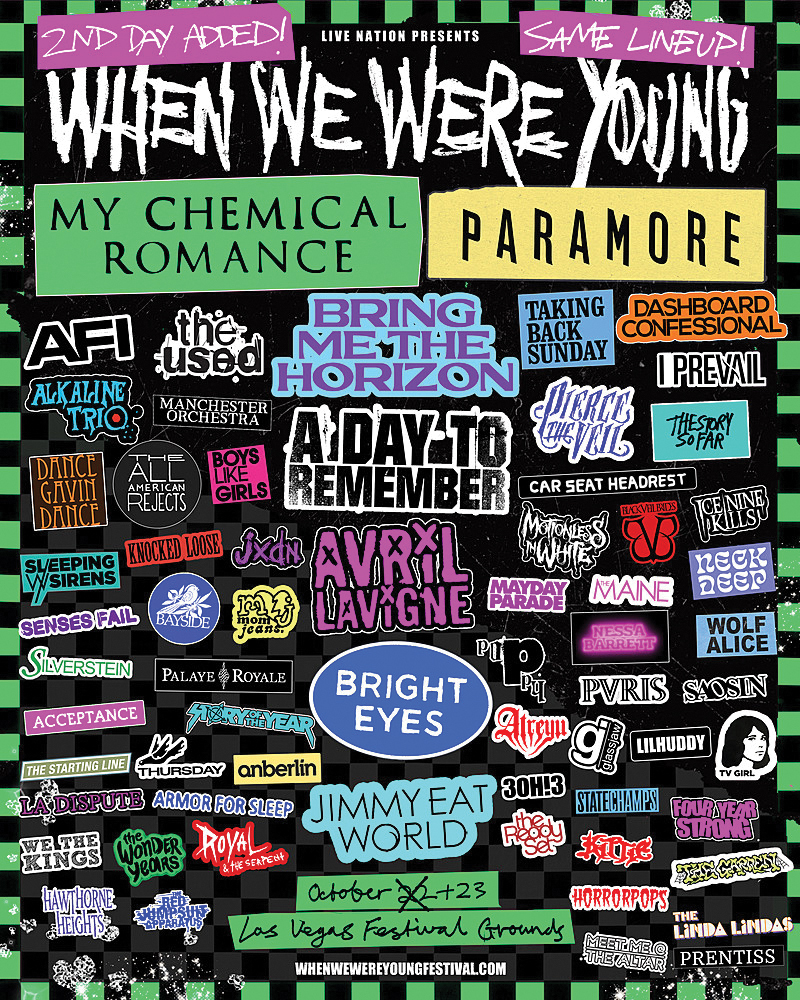 The poster to the When We Were Young Festival is a piece of emo art. Courtesy photo.

A quick survey of the checkerboard, graffitied poster — reminiscent of every stickered-up skateboard circa 2006 — brought on vivid memories. Atreyu, an obscure hardcore band, playing from the speakers of my friend’s cell phone (an LG Chocolate) on the bus ride to sixth grade; singing all the words to Boys Like Girls’ melodramtic breakup anthem “Thunder” on the floor of my bedroom; middle school dances where I can’t believe they let us listen to 3OH!3; and finally, my first concert at only 9 years old. My mom, who is decidedly the coolest mom ever, took my sister and me to see Avril Lavigne — another ghost of pop-punk past with her name proudly displayed on the When We Were Young Fest playbill.

Initially, only one day of WWWY Fest was announced for Oct. 22. Tickets sold out within hours, prompting two more days — Oct. 23 and 29 — to be added. All 65 bands are set to play on all three dates across three stages at the Las Vegas Festival Grounds, with general admission tickets going for $245 and other, sweetened packages (featuring access to air-conditioned bathrooms and charging stations) going for $400-$500 and higher. There are also VIP cabanas going for $12,500. All three dates and all levels of entry — including the cabanas — are currently sold out.

Following the collective societal realization that WWWY Fest was, in fact, real, the memes rolled in. Many pointed out that the festival is basically Warped Tour — a rock tour featuring many of the same bands that toured North America from 1995 until 2019  — on crack. The difference? Aging millennials remember paying $40 for those tickets.

This cuts to the core of most people’s beef with this Warped reincarnation: It’s an unabashed attempt to profit off the nostalgia of the latest generation made to feel like their best days are behind them. It’s no secret that nostalgia — that is, a craving for things that remind us of the simplicity and security of days past — is accentuated when experiencing trauma. Well, seeing as we’re all going through one of the century’s most traumatic events in the form of the novel coronavirus pandemic, it makes sense that the powers that be would see an opportunity to reach into the pockets of people who are excited to take part in something “normal” and feel like youths again, carefree and convinced that Paramore’s Riot is a work of art. (It is).

My hat is off to the organizers for making Too Good To Be True a reality and, despite how badly WWWY Fest reeks of a money grab, I still have enough faith in the beloved bands of my early years to believe they wouldn’t put their names on something that didn’t have (mostly) good intentions.

As for me? I plan to save my money, blast Jimmy Eat World’s Bleed American while I do the dishes and enjoy the soundtrack to my messy adolescence from the comfort of my home.

Still, I wish nothing but the best for those brave souls who give WWWY Fest a chance. If the organizers can avoid disaster, facilitate safe accommodations and give the aughts’ favorite musicians a place to do what they do best, I dare say that the world’s run-down, burnt-out and increasingly gray emos might experience some momentary joy. Rock on.