North Idaho is just a little bit country. It’s not unusual to see someone trotting a horse through most of our towns as though it were a rented scooter in downtown Seattle. We’ve got a lot of agriculture for work and for play. We also live at a time when it’s never been easier to get the information we need to perfect our farm game to a molecular level — but agriculture, an art as old as civilization itself, keeps on advancing. 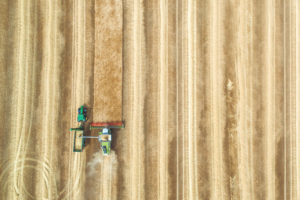 Bird’s eye view of a combine cutting through the final strip of wheat during a summer harvest. Photo courtesy @cloudvisual.

While some of the breakthroughs we’ll be looking at might not be headed to your farm right away, they are definitely some cool concepts our plough-pushing grandparents never dreamed of.

When you think about a farm, you probably think about a farmer with a tractor. I bet you don’t think about a Terminator planting seeds and harvesting crops, but it’s happening. Farmers have been using drones to scan entire fields for damage and productivity, as well as getting a bird’s-eye view to track those pesky weeds. When they find a patch deep in the field, rather than trek all the way out there, they can deploy an autonomous agriculture robot equipped with targeted herbicides to knock out those weeds. If weeds aren’t the problem, this robot can instead be equipped with liquid fertilizer and tasked with following a daily schedule and route, saving the farmer valuable time in their day.

Agriculture robots are most frequently used for harvesting crops. Despite the huge variety of headers you can slap onto a harvester, there are just some plants that you don’t want to drive over. Berry plants take a long time to develop a viable crop and will continue to do so year after year, so they’re something you don’t want to uproot with a machine. To avoid damaging their investment, some farmers are turning to small robots with grasper arms that harvest the berries but leave the plant intact.

Speaking of conundrums, have you ever wanted to eat a tasty burger, but recoiled at the thought of harming an animal to get it? Abuzz in the news a few years ago, scientists created a meat patty made exclusively from cells that were fostered, fed and bred without having to slaughter an animal to make it.

While this may sound stupid, expensive and gimmicky, it makes sense to me and I’m a voracious carnivore. Cattle production is one of the largest contributors to greenhouse gas emissions in the world. A cow farts a lot, which means it releases methane into the atmosphere. Methane reacts with hydroxyls, a group of molecules made of oxygen and hydrogen, to create all manner of molecules, including CO2, which is the primary driving factor behind rising atmospheric temperatures.

Under optimal conditions, trees draw in CO2, break it up with photosynthesis and spit out the O2 as waste, but a tree can only do so much at a time. Imagine trying to use a vacuum cleaner to suck up a puddle of water. Easy, right? Now try using that same vacuum cleaner to suck up all the water in Pack River during spring runoff to prevent a flood.

What I’m getting at with that weird climate change metaphor is if we don’t have an overpopulation of cattle farting up a storm because we can create perfectly tasty meat in a controlled area, what’s the drawback? It might sound excessive and wasteful, but did you know that Americans waste an estimated one pound of food per person per day? A 1,200-pound steer only has about 490 pounds of harvestable beef, so if someone’s diet is only beef, they’d effectively waste two-thirds of an entire farting steer every year.

Another cool, equally flatulent technology coming to agriculture was showcased in a Pauly Shore movie. Remember Bio-Dome? It turns out that movie was actually rooted in real science, and that science is making a comeback now.

As billionaire dreamers have their eyes pointed towards Mars and beyond, it becomes apparent that humans need a place to live. Everything that we consume and release from our bodies can be reused and recycled, which becomes a survival imperative on the surface of an inhospitable planet like Mars.

Scientists have begun building biospheres in some of the harshest places on our planet, carefully monitoring the life inside and using a network of sensors to monitor things like the quality of the atmosphere and water while humans tend to the plants and animals that act as their food source. This isn’t really new technology — humans have been doing this for as long as we’ve been hitting the ground with tools — but achieving the technologies to do this on other planets for extended periods of time with no external help? That’s brand new.

Are you looking to create your own biosphere, or maybe just an awesome greenhouse? I would highly recommend The Back To Basics Handbook, by Abigail Gehrig, or any of her other books on the subject. Best of all, free is never out of anyone’s budget, and you can and should check this bad boy out from the Sandpoint or Clark Fork libraries.